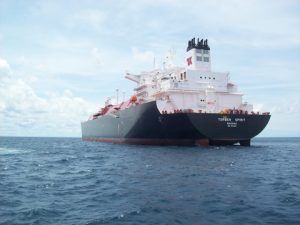 Teekay Gas, a daughter company of the Teekay Corporation, is the shipowner that has ordered the largest number of ME-GI engines, and currently has a total of eight such units aboard four of its vessels, with further ME-GI orders imminent. The Teekay ME-GI engines have operated 80% of the time on
LNG.

Teekay was an early adopter of the ME-GI concept and originally began looking into dual-fuel technology through its Vancouver-based strategic development department in November 2012.
Graham Cattley – Technical Manager, Projects, Teekay Gas – attended the annual ME-GI operators’ forum, hosted in November 2017 by MAN Diesel & Turbo’s Low Speed Business Unit in Copenhagen, and spoke about the engine. He said: “The biggest benefit really is the economics of the vessel; it’s
got a very low fuel consumption compared to rival propulsion designs and it also meets emissions regulations when we’re burning gas as well as fuel oil.

With the ME-GI, we also avoid the problem of methane slip, so we are very well placed for any future emission regulations.”

Teekay’s experience has been that the ME-GI operates just as well on gas as it does on fuel oil and the company hasn’t encountered any major differences between the fuels when in heavy weather, nor experienced any issues with different gas qualities, combustion, or knocking. 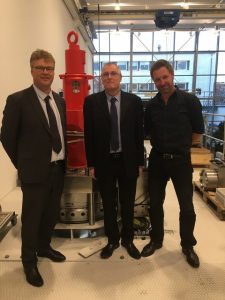 Cattley also addressed the question of being an early adopter of the ME-GI, and said: “When the first ship came into service, obviously there were teething issues. There’s always a risk involved with new technology but we also knew that MAN Diesel & Turbo was the furthest on with the design and development of these engines so it gave us confidence.”

He praised the technical support that Teekay has received from MAN Diesel & Turbo since inception and commented on the subsequent amount of innovation and changes to the engine, which has continued to evolve since  coming into service. As an example of this, Cattley cited MAN Diesel & Turbo
engineers retuning of the ME-GI’s fuel boosters and the resultant reduction in pilot-fuel consumption of at least one metric ton per day.

Cattley concluded: “It’s been a very exciting time with the ME-GI and there’s been a lot of knowledge learnt as well. You’ve got to take a risk to be a leader in the market and we wanted the vessels with the best fuel consumption. We felt the ME-GI was the right choice at the time.”

With the ME-GI engine, two-stroke development has taken a step further by combining the unique properties of multi-fuel combustion and the well-known reliability of Man Diesel & Turbo’s ME-engine. The Diesel principle provides the ME-GI engine with high operational stability and efficiency, including
during load changes and fuel change-over, while defining properties such as a stable change-over from fuel to gas with no fuel-penalties are maintained. The negligible methane slip of the ME-GI engine makes it the most environmentally friendly, two-stroke technology available.

MAN Diesel & Turbo announced the development of a new MAN B&W MELGI dual-fuel engine in 2013. The engine expands the company’s dual-fuel portfolio, enabling the use of more sustainable fuels such as methanol, ethanol and Liquefied Petroleum Gas (LPG). The ability of the ME-LGI engine to run on sulphur-free fuels offers great potential.

About Teekay Gas
The Teekay Corporation was founded in 1973 and grew from a tanker operator to an operational leader and successful vessel owner in the conventional shipping market. The group has since expanded across new segments including gas and offshore and created four publicly traded
companies.

Teekay Gas entered the LNG shipping market in 2004 and, today, offers a= variety of LNG solutions including floating storage units (FSU). Teekay Gas now has ownership interests in 80+ vessels, with one of the world’s largest LNG and LPG fleets.