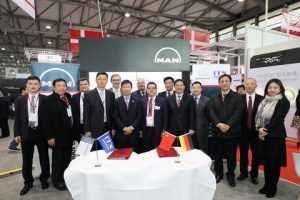 From the signing ceremony*

The Agreement provides for the strengthening of the cooperation between the two companies in the fields of ship design, ship-type research & development, ship power, ship automation, environmental protection, intelligent ship and battery solutions.

Ang said: “This Agreement represents a new start in our collaboration with CCS, one which I am certain will bring us more opportunities and successes. China is one of the most important markets for us already, accounting for more than 12% of our total revenue. And we see great growth opportunities
here and want to deepen our partnership with the Chinese economy”.

“CCS and MAN had a very good cooperation in the past years. And we believe the Agreement will help us to explore and carry out collaboration within the areas of common advantages”, said Sun Feng at the signing ceremony.

The Agreement is a renewal agreement under the Framework Agreement for Technical Cooperation signed by both parties back in 2013. MAN Diesel & Turbo and CCS have since strengthened their cooperation within the abovementioned fields.