Blows traded on a tense third day in Sanya 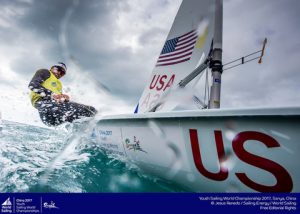 Leading competitors in the nine fleets at the 2017 Youth Sailing World Championships were trading blows in a tense third day of racing in Sanya, China.

Those in contention for medals were fighting for every inch across the four course areas to put themselves in a good position ahead of the penultimate day.

In another variable 6-14 knot breeze from the east, Charlotte Rose (USA) and Dolores Moreira Fraschini (URU) went toe to toe in the Girl’s Laser Radial and Israel’s Yoav Cohen had a back and forth battle with China’s Hao Chen in the Boy’s RS:X.

After another two Girl’s Laser Radial races, Rose and Fraschini have opened a 20-point advantage over Luciana Cardozo (ARG) at the front of the pack.

Summarising the day Fraschini said, “Today I had a first and a fourth and she [Rose] had a fourth and a first so the level is good and the competition is super high.

“We are doing our best and now we are first and second and we have to try and keep our performance consistent for the coming races.” 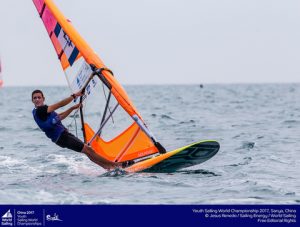 Fraschini knows what it takes to perform on the major international stage having won the 2016 Youth Worlds, competed at the Rio 2016 Olympic Games and claimed a silver at the 2015 Pan American Games.

Rose sits on eight points with Fraschini following on 12 with three races to go and the Uruguayan feels confident that she can overhaul the American, “I have a better discard than her so maybe I can play with that in the next races.

“I have more Championships than Charlotte and I think that helps but once you are on the water, anything can happen. It all depends on who has the better strategy.”

The Uruguayan currently discards a ninth and the American, a 17th. If it’s close after Thursday’s racing it could all come down to the final race and potentially, some match racing but Fraschini is playing her cards close to her chest, “The plan right now is to keep sailing as I am doing and keeping calm because if I get nervous I start to think about the points and it won’t help. I am trying to enjoy it and then we’ll see what happens.”

Russia’s Daniil Krutskikh is sailing consistently at the front of the Boy’s Laser Radial fleet and as a result has moved into the overall lead. A fourth and an 11th was enough to remove Guido Gallinaro (ITA) from top spot. The Russian is two points clear of the Italian.

It was another mixed day for New Zealand’s Josh Armit. After a 1-14 on day one, another 1-14 on day two, he picked up a fourth and a 20th. Despite an inconsistent scoreline he moves into third overall, two points clear of South Africa’s Calvin Gibbs. 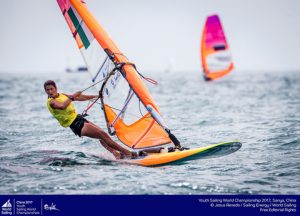 Between Israel’s Cohen and China’s Chen, they have won all but one Boy’s RS:X race. Cohen managed to secure two out of three wins on Wednesday and dislodged Chen at the front of the pack to lead by two points.

Despite a language barrier between Cohen and Chen, there is a mutual respect between the pair and the Israeli is loving the competition, “I have never raced with Hao Chen before. We have a respectful relationship on the water, although there is a big language barrier.

“The Chinese are really good and with light winds they can perform well which means every minute I have try my best to win. The Chinese RS:X sailors come to events once a year and it’s always a surprise to see someone good.

“It’s pretty close racing but it’s good because it’s making it harder for me and I learn a lot from that.” 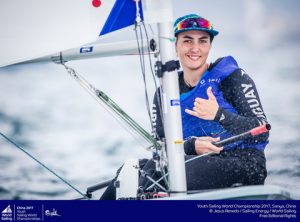 In the Girl’s RS:X, 2016 champion Emma Wilson (GBR) put the pressure on overnight leader Giorgia Speciale (ITA) by beating her in every race. Wilson’s 2-2-1 was enough to see her one place ahead of Speciale in each race and the pair are now locked on 16 points. The Italian leads thanks to her three race wins but the pressure is on for the front runners.

China’s Ting Yu is five points off in third.

Lucas Claeyssens and Anne Vandenberghe (BEL) thrived in the lighter breeze on the first two days but as the stronger breeze came in, they were unable to replicate their early form.

A 12th, second and discarded 15th saw them drop to second. By their own admission, the Belgians are light wind specialists and recognise the strength of their rivals in stronger breeze.

Switzerland’s Max Wallenberg and Amanda Bjork-Anastassov capitalised and put three good results together to grab the lead by a single point over the Belgian team.

Slovenia’s Rok Verderber and Klemen Semelbauer moved from fourth to first in the Boy’s 29er. The Slovenians remained consistent recording a 7-1-7 and lead Finland’s Ville Korhonen and Robin Berner by a single point. Théo Revil and Gautier Guevel (FRA) remaining in contention in third.

New Zealand’s Seb Lardies and Scott Mckenzie won two of the day’s races but they sandwiched a 17th putting them in sixth overall.

Italy’s Margherita Porro and Sofia Leoni extended their lead by a significant margin in the Girl’s 29er. A 3-5-2 gives them a 26-point advantage over Ismene Usman and Svea Karsenbarg (NED). With three races on Thursday, the Italians could seal gold with a day to spare.

Meanwhile there is a tight battle going on for silver and bronze with ten points splitting teams from second to tenth.

Otto Henry and Rome Featherstone (AUS) surrendered their Boy’s 420 lead after a contrasting day to their previous two. They started the week well, recording a 4-2-2-1 scoreline but in Wednesday’s racing, a discarded 15th and a 13th saw them slip.

Israel’s Ido Bikik and Noam Homri pounced, winning the first race of the day and taking a third in the next. They now have a six point advantage over the Australians. America’s Thomas Rice and Trevor Bornarth (USA) are tied on 22 points with Henry and Featherstone.

American twin sisters Carmen and Emma Cowles were in fine form once again in the Girl’s 420 and added a pair of seconds to hold on to their overnight lead.

They are now 12 points ahead of France’s Violette Dorange and Camille Orion who claimed a race win and 16 points ahead of Italy’s Arianna Passamonti and Giulia Fava who took the day’s other victory.

Racing resumes on Thursday at 11:00 local time. A full day of racing will be held for all classes ahead of a single race on Friday that will close the event.