As exciting developments in trans-Eurasian trade gather speed, the Caucasian country of Georgia is rising to new prominence in the maritime world. The nation is felicitously located at mid-point in the corridor of what is viewed as the New Silk Road between China and the West.

Georgia’s enhanced standing has been recognised by the International Maritime Organization which has elected as one of its two vice-presidents the nation’s ambassador to the UK and permanent representative to the IMO, Her Excellency Tamar Beruchashvili. 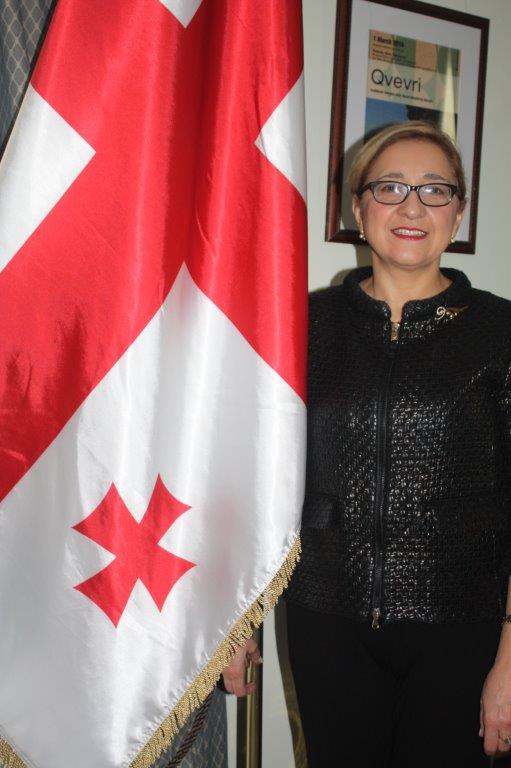 The ambassador is an IMO vice-president.

The vote, at the 30th session of the assembly in early December 2017, marked the first time Georgia has received such an honour. It was announced in front of 1,500 delegates from IMO member states and high-profile organisations including inter-governmental associations, shipping interests, industrial sectors, environmentalists, lawyers and insurers.

Georgia is a member state of the IMO since 1993 and was proclaimed as a flag state in early 1993, with the first attempt to organise the relevant administration in the country in 1997. In 2010, Georgia faced major challenges in shipping standards and seafarer’s education and certification system and the EU withdrew recognition of Georgian-issued certificates of competency.

However, this unfortunate event opened the chance to re-establish Georgia’s maritime image aiming at highest possible standards both as a flag state and as a supplier of seafarers.

A complete overhaul of the maritime sector in Georgia has put the country among the nations that adhere to the principle of responsible shipping, going beyond the scope of International Maritime Organization criteria, and allowing Georgia a new chapter of relations with the International Labour Organization.

The removal of Georgia from the Black List of the Paris Memorandum of Understanding on Port State Control and reinstating EU recognition for Georgian-issued seafarers’ documents, as well as success in the IMO Member State Audit Scheme — speak volumes for the efforts of the government of Georgia to ensure that substandard shipping is eliminated, and seafarers’ rights are respected. This enables the Georgian maritime flag to be honoured as the “flag of new possibilities.” Today the register counts 83 vessels. 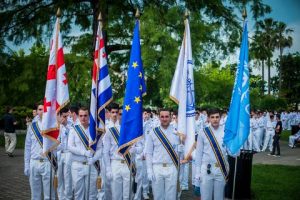 Day of the Seafarer at Batumi.

Georgia has ratified all major IMO treaties, and is in the process of ratification or accession to five further treaties. It says that it is meeting the latest safety, security and environment protection norms, including air pollution standards in the light of the Paris agreement on climate change, and meeting criteria of Marpol annex VI.

Speaking in her office at Georgia’s London embassy, Mrs Beruchashvili expressed pride in assuming the IMO assembly vice-presidency, which she viewed as “not just advertising our country, but as an opportunity to contribute to IMO’s objective to promote safe, secure, environmentally sound, efficient and sustainable shipping.”

She says she has the conditions for making a success of the job because of the experience of her colleagues. Mrs Beruchashvili has great professional admiration for Rolando Drago Rodríguez, ambassador of Chile, who is new assembly president of IMO, and for her fellow vice-president Euripides Evriviades, high commissioner of Cyprus, “an exemplary diplomat and a man of wide knowledge.”

Mrs Beruchashvili, who has an impressive CV of governmental and civil service appointments including a spell as minister of foreign affairs, will be called on to exercise her diplomatic skills as she helps co-ordinate the policy ambitions of IMO participants and works with the secretariat. 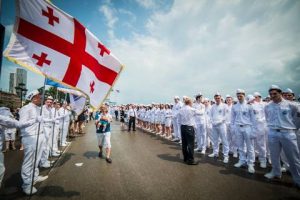 On parade in Batumi.

She will need, as she puts it, “to find the way to navigate” the currents of IMO to achieve what is important for the organisation, adding: “It is an exciting environment and Georgia is fully committed to the mission of the organisation, which is to promote safe, secure, environmentally sound, efficient and sustainable shipping through cooperation. Moreover, for us responsible shipping at the maritime crossroads – is the principle which is adhered to by Georgian government.

“While considering Georgia as a regional transportation hub, it is important to highlight that Georgia’s image as a responsible flag, port and coastal state is the key factor for persuading our international trade partners that our trade routes are safe, secure, environment friendly, easy to traverse, accessible and without undue bureaucratic burdens,” the ambassador states.

On behalf of her country, she maintains: “to promote Georgia as favourable investment destination is our priority. It creates opportunity for more engagement.” This is highlighted by the start of one of the biggest maritime projects for years in Georgia – breaking ground for the planned deep-water port of Anaklia. The new port will be “a game changer for the wider region,” says the ambassador. 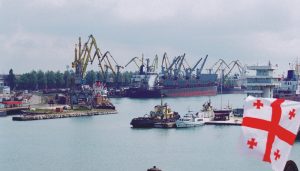 Anaklia will complement the four established ports: Batumi, Supsa, Poti and Kulevi. Currently a small town mainly known for its month-long summer electronic music festival, Anaklia is being reinvented as a trade gateway for the countries of Central Asia and the Caucasus, because it sits on the shortest route from China to Europe, a route that has become a major focal point of international investments in infrastructure.

Its backers say that as such, the port will attract high-value freight seeking the fastest transit. This cargo represents significant upside for the port and, it is promised, will create robust returns for shareholders.

Anaklia is the last technically feasible location in the country for a new deep-sea port and is in a geographically ideal location. The route via the Black Sea is important to ensure competitive pricing with other major routes across the continents, says Mrs Beruchashvili.

The new port will accommodate post-panamax ships, with berthing for 10,000 teu vessels, and flexibility for multiple cargo, panamax, handymax and aframax types. 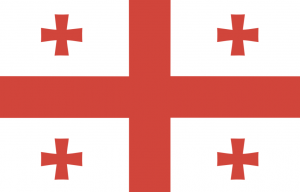 LTD Anaklia Development Consortium, a joint venture of Georgia-based TBC Holding and New Jersey-headquartered Conti Group, was selected in February 2016 to launch the Anaklia scheme, with a 52-year concession.  The port will be built in nine phases, gradually reaching capacity of 100m tonnes of cargo annually. Of the total cost of $2.5bn, around $586m will be invested during phase one to achieve 7m tonnes capacity within three years of ground-breaking

The government of Georgia will contribute to the development by providing a large amount of land for the port and a special economic zone and by constructing rail and road connections. Total cost of government input will be more than $100m.

Construction of the facility will create favourable conditions for the development of logistics services and value-added services, resulting in a significant increase in cargo turnover through Georgia, say officials. They foresee that the project will have a huge socio-economic impact on the western part of the country, creating thousands of new jobs. 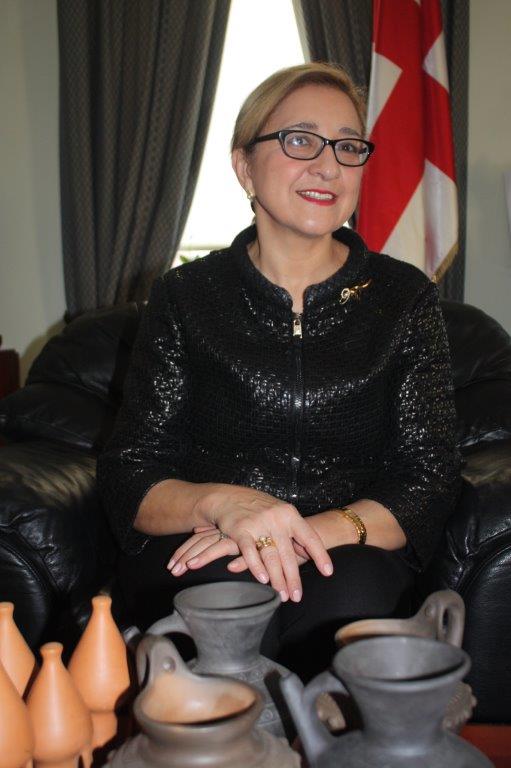 While there is strong emphasis on responsible shipping at the maritime crossroads as a principle followed by the Georgian government, “our approach is not only a narrow sectoral approach: we see the maritime transport sector as a part of the country’s infrastructure network, which is currently under total upgrade,” recounted the ambassador.

Railway modernisation, east-west highway construction and the Baku-Tbilisi-Kars new railway connection are other priorities which align with China’s One Belt One Road initiative to strengthen trade.

The highway construction and improvement project is important for Georgia and its neighbouring countries, and for the EU as part of a strategic route between Europe and Central Asia. At this stage about half the construction work is completed. The project has been financed by the central budget of Georgia, and the World Bank, Asian Development Bank, Japan International Cooperation Agency, and European Investment Bank. The total cost of this project is $3.24bn, of which $1bn has already been spent.

Officially inaugurated at the end of October 2017, the Baku-Tbilisi-Kars $775m new railway line connects Azerbaijan, Georgian and Turkish railways. Bypassing Russia, the 826 km-long line – which connects with a train ferry across the Caspian Sea – allows much faster delivery of containers, freight and passenger traffic from Asia to Europe, halving the time of a 30-day sea voyage. Initially, this railway line can handle 5m tons of cargo and 1m passengers, and its capacity will triple in subsequent years.

Joint Stock Company Georgian Railway is modernising its lines at a cost of SwissFr260m, with about one third of such work completed. The main objectives are optimisation of freight and passenger traffic times, reduction of operating expenses, improvement of operational safety and maximisation of freight capacity. 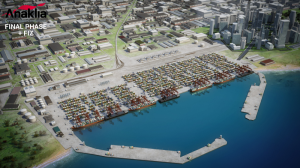 How Anaklia deep-sea port will look.

Another important priority in the maritime field is seafarers’ training and education. Currently Georgia is home for over 13,000 seafarers and this number is increasing. The government significantly supports and facilitates maritime education in the country.

“We are promoting co-operation among training providers and networking particularly with the specialist educational institutions,” says the ambassador.

Recently representatives of Batumi State Maritime Academy visited the UK to meet maritime training institutions. Among the most important achievements was the establishment of cooperation with Southampton Solent University and Warsash Maritime Academy. As a result, signing of a memorandum of understanding for the establishment of a mutually beneficial partnership is under consideration and will be signed soon. The partnership will involve exchange of professors and students, sharing experiences and cooperation in programmes and activities.

The Batumi academy upholds the International Convention on Standards of Training, Certification and Watchkeeping for Seafarers (STCW).

Mrs Beruchashvili says that “all these undertakings are inter-connected and give us the wider room for understanding of the entire transport sector, by putting emphasis on maritime transport and enhancing Georgia’s maritime image world-wide.”

Among major developments, in September 2016 the first Georgia International Maritime Forum was attended in Batumi by more than 300 delegates from 50 countries, by the secretary general of IMO Kitack Lim, secretary general of the Organization for Democracy and Economic Development-GUAM Altai Efendiev, secretary general of the Organization of the Black Sea Economic Cooperation Michael B Christides and by several transport ministers, and there is to be a second such conference in September 2018. “We want to engage the IMO at the highest possible level, and the EU, European Bank for Reconstruction and Development and other institutions, together with shipping organisations,” said Mrs Beruchashvili.

The principal aim of the Georgia International Maritime Forum was to raise awareness within the region and beyond of the indispensability of shipping and the critical need for ensuring healthy oceans considering the IMO theme for 2016. The next forum will echo the 70th anniversary of the IMO convention and the United Nations sustainable development goals 2030, as the forum is designed to be not merely informative but proactive in coming up with recommendations.

The 70th anniversary of the founding convention of IMO will be saluted globally in 2018 under the theme “Our heritage – better shipping for a better future.” As a country with growing maritime importance, Georgia has pledged to play its part in the celebrations at home and internationally, including within the Georgia International Maritime Forum 2018.