Capers begin to dive; give peace another chance!

The BDI (Baltic Dry Index) lost 19 points earlier on today and now reads 1,095…. Geopolitics puts Peace on the shelf so we urge all to Give Peace ANOTHER chance! John Faraclas’ daily briefing:

The Capers begun to dive again; today the loss was 72 points with the BCI standing at 1,721 points. CAUTION!

The Wets  with mixed feelings – the last published BTI and BCTI (Cleans) stood at 637 – down three and 642 – up eight points respectively.

We are also awaiting to see how the markets rebound (?) after the Chinese Dog barks!

The Geopolitical situation gets worse and we warn of potential incalculable damage due to Turkey’s inappropriate and on purposes behaviour putting the World Peace at stake and its backers should really here and now back-off – we have to use a bit of this language… The Shipping Community in Turkey should rise to the circumstances and see the only way  forward is that of Peace in the region. Of course we understand all are under duress and CANNOT express themselves  freely, but still they can find a way, believe you me!!!! Indeed we have noticed many Turkish entities have sided with their autocrat president Erdogan, although in the past at least as we have witnessed they have shown signs of bringing the two neighboring nations into a peaceful coexistence!

All the rest of issues remain the same with respect their classification and priorities, but one of them coming up – for which we have explicitly stressed in the past is, besides BREXIT and its consequences, GREXIT, FREXIT and ITALEXIT, given the worse ever state of these three nations economies. Just imagine Italy and France with very bad deficits and mountainous of debts – Greece looks fine in comparison, to burst… Last but not least we must look after the MIGRANTS, the most important issue from all put together!!!

As we said in our recent reports, we are at WAR in all fronts and need to see a World leader to streamline the situation, as very soon we will be in an all-out War – physically and economically as the Business Hooligans and their crones – politicians, and diplomats DO collaborate in their pursuit of greediness. We eagerly await to see the outcome of the Novartis case as well as others already there and others to officially surface in the news! Moreover  we wonder how we can reduce all these sex and business scandals that appear every single hour – basically resurfacing from the past… 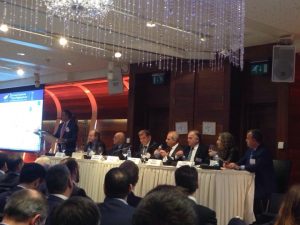 The Capital Link’s 2nd Cyprus Shipping Forum at the Columbia Plaza in Limassol was more than a success; we will revert with a write up soon.

On another tone, we are fully geared for the Isalos’ Conference in London’s Hellenic Centre tomorrow under the theme “World Trade and Commerce: why Go Maritime in this turbulent era?”

That’s all for tonight, enjoy Valentine’s Day and be on guard from any eventuality emanating from Pirates and Terrorists wherever you are on Planet Ocean.

Survitec to present at the Informal Tanker Operators’ Safety Forum