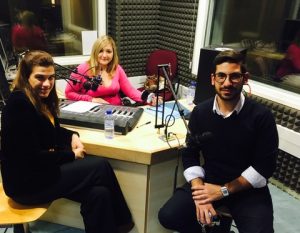 l to r: Natasa Pilidou, Gina Panayiotou and  Constandinos Papaminas, at the studio of Cut-Radio

Following her recent appointment as first Deputy Minister of Shipping, Mrs. Natasa Pilidou, was hosted in an exclusive interview, on the radio show “It’s ALL about Shipping!,”* on Wednesday, 14th of March, 2018.

Mrs. Pilidou shared her vision for shipping, explaining the targets and aims of the deputy ministry, noting the areas of focus, as well as the areas, which require further development. When asked what new dimension to Cyprus shipping will the newly established deputy ministry will facilitate, Mrs. Pilidou explained that as the Department of Merchant Shipping has served as an excellent technical orientated department for the Cyprus shipping cluster, the Deputy Ministry will be complimenting this activity, by building a strong policy and strategy department. The role of this department will be to re-evaluate strategies and develop such strategy into targeted actions,  focusing on the ministry’s goals. As Mrs. Pilidou further explained such strategy must be re-evaluated to assess the goals set, in respect to the actions that are being taken to meet them, in order to ensure successful results. This is a practise, which Mrs. Pilidou implemented in her previous position, as Director General of CIPA and which delivered excellent results in relation to foreign investments and which she believes will do so for the shipping sector.

As the radio show is primarily aimed at facilitating the mentoring for the younger generation in shipping, Mrs. Pilidou was also asked to share her experiences in respect of the challenges she has faced in her career so far, if she encountered prejudices either due to her age or gender and her advise towards the youth in achieving their goals. Her advise was, to work hard, explaining that you have to prove yourself in order to “move up,” to always be prepared and to have the self belief and courage to not settle and compromise. Mrs. Pilidou also noted that all mistakes are necessary in order to form our personality, as different experiences are very important in setting us apart. She concluded in saying that, what you study at university is a minor part of the skillset you acquire as an individual, make sure you broaden your horizons, in order to have more things to offer and to enjoy!

“It’s ALL about Shipping!,” is hosted by Gina Panayiotou, Legal Manager of Intership Navigation Co. Ltd. and Constandinos Papaminas, Claims Assistant at Norient Product Pool ApS and it is broadcasted on the community radio of the Cyprus University of Technology (TEPAK), Cut-Radio 95,2,* every Wednesday evening between 20.00-21.00pm. Each week a guest from the shipping community, either local or international, is interviewed in sharing their experiences and insights. The show aims in raising awareness of shipping related matters, as well as inspiring the younger generation in this respect.

Link to the full recording of the radio show: https://soundcloud.com/gina-panlb/its-all-about-shipping-natasa-pilides-14032018

It’s ALL about Shipping

It’s ALL about Shipping