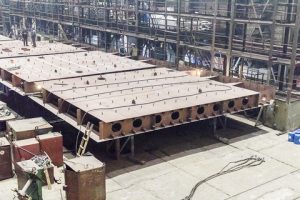 Okskaya Sudoverf (a company of UCL Holding) has laid down the fifth and the sixth non-self-propelled tank barges of Project ROB20 (Hulls No 4105 and No 4106) under the order of State Transport Leasing Company (STLC PJSC).

Non-self-propelled tank barges of Project ROB20 are intended for transportation of petroleum products with a flashpoint of 610C and above. Heavy fuel oil is the key cargo. With their double sides and double bottoms the vessels feature an improved level of environmental friendliness.

The barges will be operated on the Balaya, Kama and Volga rivers.

A series of ten vessels is being built under a leasing scheme. The contract for construction of the barges was signed on 31 October 2017.