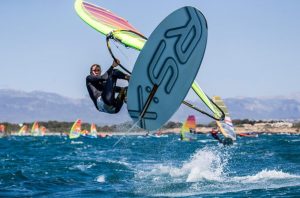 The 49th Trofeo Princesa Sofia Iberostar regatta came to an end on Saturday in Palma, Spain, after a packed five days of competition. Overall victories in five of the ten Olympic classes were decided before Saturday’s double points medal race. You can watch the regatta roundup here.

All teams have now crossed the finished line in Leg 7 of the Volvo Ocean Race, Auckland to Itajaí, Brazil. The Spanish team MAPFRE arrived at the finish line on Sunday morning, securing a fifth-place finish and collecting six points. The result hands the overall lead in the race to Dongfeng Race Team, who lead over MAPFRE with a one-point advantage.

In the 2018 Morocco PWA Windsurf World Cup, it was a close competition between first, second and third but the reigning world champion, Iballa Moreno, managed to claim gold in the Women’s Wave. Sarah-Quita Offringa won silver and Daida Moreno won bronze.

The Techno 293 Plus European Championships also came to end this week, in Sicily, Italy. An impressive 130 competitors from 27 countries took part in the Youth Olympic Games Qualifier. Read more in the news section below.

In other news, the Tokyo 2020 Olympic Sailing Qualification system has been released. Click hereto view it.

All sailing news can be found on the sailing.org website or across all of our social media platforms.

The BDI@979: uncertainty and unsustainability… War is on!