A “Fondaco 4.0” in Venice and Porto Marghera to take opportunities presented by the New Silk Road 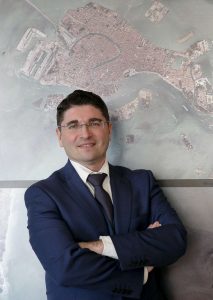 A “Fondaco 4.0” (trading post) in Venice and Porto Marghera to take advantage of the opportunities presented by the Chinese strategy for a New Silk Road and to ensure that development of the Venetian stop on the route is centred on the harbour. That is what the President of the Autorità di Sistema Portuale del Mar Adriatico Settentrionale (The Northern Adriatic Harbour System Authority), Pino Musolino, said at the event entitled “A NATURAL CONNECTION FOR CHINA IN EUROPE”, organised today by Assoporti at the Transport Logistic China trade fair in Shanghai.

Venice is actually at the heart of the strategy for the New Silk Road, not just in terms of container transport but also because of the heavy industry products and cargo projects in which the port of Venice is the undisputed leader in Italy. Now, thanks to the multipurpose nature of the Port of Venice, which is reflected in the options it opens up of importing various raw materials needed by the manufacturing base of North-East Italy and the country as a whole and in the export of high or very high value-added products, sustainable, real development can be considered at Porto Marghera, a place where maritime traffic works alongside and supports production. It is a place to start investing again and to implant production work because of the virtuous circle which brings together manufacturing and logistics. 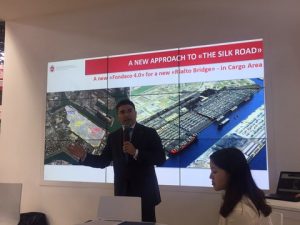 “I have backed a port-centric vision for a long time”, said President Pino Musolino, “by which it is consumption and production that feeds trade, which – in turn – supports and strengthens logistics. I actually believe that a harbour development strategy aimed at infrastructure expansion which is an end in itself, as well as not being environmentally sustainable, will not even produce good economic results since it doesn’t trigger an automatic increase in traffic”.

That is where the idea of copying the winning idea that made Venice the Queen of the Sea came from. The Rialto area was actually the beating heart of trade and it was the development of trade which expanded maritime routes and led to the creation of the “Fondaci” – real functioning centres reserved for the main trading partners of the Most Serene Republic – in the Rialto area. That is the origin of the idea to create a “Fondaco 4.0”, in Venice and at Porto Marghera, to put together the trading partners of the Port of Venice with production and manufacturing.

“The Silk Road is an extraordinary opportunity”, the President concluded, “but we have to have a patient dialogue with China and with the other countries that are interested in its strategy, ensuring that due emphasis is given to European (primarily Italian) manufacturing and production quality, the potential of logistic innovation that is also based on digitalisation, and the growth of technological know-how in the transport sector. And all of this should be done not to obtain financing but trading-type agreements; not to beg for easy access to financial tools, but to develop and optimise our logistic chains; not to close the markets, but to open them on condition of reciprocity”.