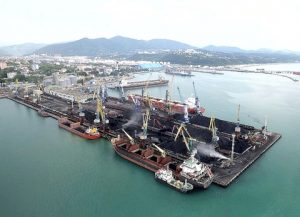 Cargo handling at the terminals of Tuapse Sea Commercial Sea Port Group (TSCP Group, part of UCL Holding), between January and March 2018 decreased by 8.4% on the same period a year before to 3.88 million tonnes.

The three-month result was attributed to a 25.4-percent decline in liquid bulk cargo segment, to 1.7 million tonnes (-25.4%), following a downward trend in customer requests for the commodity transshipment. In the reporting period handling of coal exports fell to 700,000 tonnes compared to 740,000 tonnes a year earlier.
At the same time, handling of ferrous metals rose 26.3% to 0.79 million tonnes thanks primarily to a 63.5-percent growth Y/Y in slabs exports.
“The upward trend in cargo throughput seen in recent years is the result of successful partnership with the port’s strategic partner – the NLMK Group, increasing the efficiency of operational cooperation. In addition, TSCP Group was consistently implementing its development program, including the modernization of its berths and storage facilities, the upgrade of a fleet of gantry cranes and rubber-tired vehicles,” the TSCP press office said.
Handling of grain exports in the first quarter increased by 18%. Strong growth in the commodity volume was due to demand prevailing in grain export markets and to constant improvement of routine handling operations by the TSCP Group, in particular, the synchronization of railcars spotting for unloading and docking of ships for loading.
In the reporting period TSCP handled 10,300 tonnes of fruits and vegetables.
The volume of exports, which forms the bulk of TSCP throughput, in the first quarter declined by 9.8% on the same period in 2017 to 3.8 million tonnes, while imports and coastal trade volumes totaled 59,000 tonnes.
Overall, between January and March of the year, TSCP Group handled 193,000 commercial ships, including 90 dry cargo carriers and 103 oil tankers, and 31,500 railcars.
About TSCP

Tuapse Sea Commercial Port Group JSC (TSCP Group) is the major port and terminals operator at the Port of Tuapse, one of Russia’s largest ports. TSCP is a member of UCL Port, a stevedoring division of the international transport group UCL Holding. UCL Port also comprises Sea Port of Saint-Petersburg JSC, Container Terminal Saint-Petersburg JSC, Multipurpose Reloading Complex LLC based in North-West of Russia, and Taganrog Sea Commercial Port in the South. The fleet of TSCP’s cargo handling equipment comprises 27 gantry cranes with capacity of 10 to 124 tonnes, 65 loaders and bulldozers. In 2017,