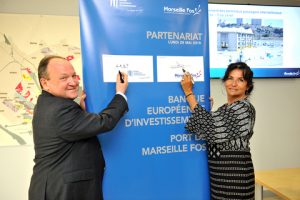 The projects, which require a total investment of €136 million, include connecting the two existing Fos 2XL deepsea container terminals via a mid-section to provide a continuous quay length of 2.6km. Due to start this summer, the extension will increase capacity by 15-20% and improve berthing for ultra-large boxships.

Two other projects in the Fos western harbour area are also covered under the agreement – further development of the Feuillane logistics park and renovation of two ship refuelling stations. Meanwhile, in the Marseille eastern harbour, the funding will go towards reorganisation of the Corsica and North Africa ferry passenger terminals and enlargement of the Passe Nord access for mega-cruiseships.

The agreement was signed on May 28 by Marseille Fos CEO Christine Cabau Woehrel and EIB vice-president Ambroise Fayolle, who later visited the site of the container terminal project. Mme. Cabau Woehrel commented: “Ten years after having helped Marseille Fos to create Fos 2XL, we are honoured that the EIB is renewing its confidence in our projects to such a level. We now have the investment capacity to continue developing our infrastructure and to reinforce our international scope. This support addresses the interest of our port-industrial cluster in ensuring we have the means to attract the very biggest international investors to our territory.”

M. Fayolle added: “I am very happy that funding of this scale supports the attractiveness and development of France’s premier port. By giving the port the means to equip itself with modernised and efficient infrastructure geared to market demand, the EIB has strengthened the capacity, competitiveness and international influence of a port complex that is unique in France. Our goal is to accompany the port’s long-term development and support the site’s businesses and employment.”

Under a diversification strategy giving entry to new markets, Marseille Fos has seen strong traffic growth over the past three years together with increasing implantation by large industrial organisations. The EIB funding will ensure that the port meets important deadlines as its 2014-18 strategic plan draws to a close and allow it to fix the objectives proposed in its 2019-23 plan.