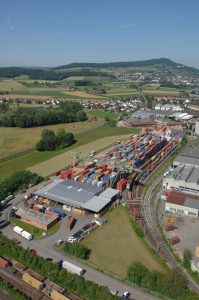 An aerial view of the Niederglatt/Zurich terminal

Frenkendorf, Switzerland, 13 June 2018: The container terminal Niederglatt/Zurich, operated by Swissterminal Group, will offer Swiss importers and exporters a new direct rail link to the Rail Hub Milano in Melzo/Milano with five departures per week from 2 July 2018. This new connection is operated by intermodal operator Hannibal, which is part of the Contship Italia Group. In addition, the Schweizerzug, a transport product by Swissterminal Group, will increase its service connection between Niederglatt and Frenkendorf to four links per week at the same time. Frenkendorf offers direct rail links to Antwerp and Neuss (Germany). Via Neuss, there are further connections to Rotterdam and Antwerp respectively, either via barge or rail.

Since the Swissterminal Group reopened its Niederglatt site in the greater area of Zurich in 2017, the company has recorded a growing demand for additional connections, especially from clients around Winterthur, St. Gallen, Chur and Zug. The expanded service frequency between Niederglatt and
Frenkendorf and onwards to Antwerp and Rotterdam as well as the new direct link to Melzo offers
shippers a wealth of transport options via ports in the West as well as South.

The demand for shipments via ports in the South has been steadily increasing since 2013. This route
is an important alternative to bigger ports in the west rather than a replacement, adding to a better risk
management for shippers and forwarders. The importance of having different transport options ready
in case of need has been illustrated by the Rastatt closure in August 2017 and Niederglatt’s
introduction of new service connections meets the need for alternative transport options.

On top of the new rail link to Niederglatt, Hannibal will continue to operate between Frenkendorf and
Melzo, from which manifold links to Italian sea ports such La Spezia and Genoa and to continental
destinations are available.

Niederglatt features a direct link to the Swiss rail system, which means the Swissterminal Group can
make an important contribution to saving the environment. “We estimate that a transport volume
equivalent to the capacity of 10,000 goods vehicles can be shifted from road to rail. And that applies
only to the distance between Basel and Zürich!”, explains Roman Mayer, CEO of Swissterminal
Group.

Furthermore, the new rail links help to reduce congestion on the roads. Easy access to the A1 and
A51 motorways ensures excellent connections for freight transport to neighbouring regions.
“It is the goal of Swissterminal Group to offer Swiss importers and exporters the best solution for
shipping their freight via different European ports. Through Niederglatt’s new connections, clients in
the greater are of Zurich and in the East of Switzerland benefit from a quicker and more reliable
service to destinations in the West and South”, adds Mayer.

The Swissterminal Group will do its best to maintain neutral and fair competitive conditions for the
Swiss market also in the future. “This is not only necessary with reference to the market economy. A
decentralised terminal organisation is also an important element in ensuring supply chains all over
Switzerland. In this connection it is extremely important for us to be able to offer redundant services to
our customers. This applies not only to international transport chains and various options for ports of
lading, but it is also essential with regard to risk management on inland routes in order to reduce our
vulnerability,” Mayer points out.