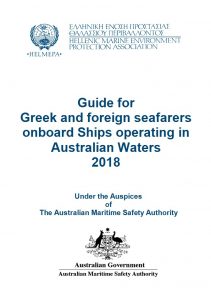 The Hellenic Marine Environment Protection Association – HELMEPA, was established on 4 June 1982 by the joint initiative of Greek seafarers and ship owners, who co-signed the Declaration of Voluntary Commitment titled “To Save the Seas”.  By the Article 4 they declared: “We pledge our expertise and energies to raise the environmental consciousness of the Greek Shipping Community so as to lead in an effort to combine environmental regulation and voluntary will for the elimination of ship-generated pollution”.

Consequently, HELMEPA also cooperates with national maritime Authorities such as AMSA, the Australian Maritime Safety Authority, which regulates maritime activities in Australia. Through its contribution, HELMEPA published in 2000, in Greek and English, the “Guide for the Greek Seafarers in Australian Waters” and made it available to its Member companies, vessels and seafarers.

Now in 2018, HELMEPA offers to its Members the electronic publication “Guide for Greek and Foreign Seafarers onboard Ships operating in Australian Waters” revised with the warm support, as ever, of AMSA and the hope that it will constitute an important aid for the officers of the ships trading in Australia and transiting the Great Barrier Reef.

Sincere thanks are addressed to AMSA’s CEO Mick Kinley and Manager, Ship Inspection and Registration, Alex Schultz-Altmann as well as their colleagues for the time and effort dedicated to the accuracy of the new publication.

Berge Bulk vessel to sail with WindWings in...

Permanent magnets: may the force be with you