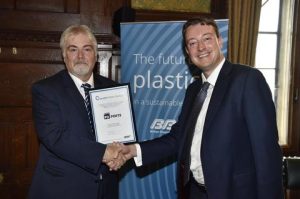 Simon Clarke MP presenting an award to David Jones, Group Health, Safety and Environment Manager at PD Ports, to mark their signing up to Operation Clean Sweep, at the British Plastics Federation Parliamentary Reception at the House of Commons today, Monday 10 September.

Teesport has become the first UK port to actively minimise the risk of plastic pellets from leaking into the environment, as its operator PD Ports signs up to the Operation Clean Sweep® (OCS) initiative. The project, run in the UK by the British Plastics Federation (BPF), introduces measures to keep plastic ‘nurdles’ safely away from rivers and seas.

Simon Clarke, MP for Middlesbrough South and East Cleveland, announced the landmark agreement, while presenting the OCS certificate to PD Ports at a BPF reception at the House of Commons on Monday 10th September. Mr Clarke states:

“Today’s news is a major step forward in the fight against plastic pollution, and will delight the hundreds of my constituents who take part in regular beach cleans at Saltburn and along our local rivers and streams. The British Plastics Federation is doing wonderful work tackling this scourge, and PD Ports deserve great credit for engaging swiftly and decisively as the first UK port to sign up to Operation Clean Sweep.

“Plastics have a crucial role in our economy but it is vital they are produced and transported in a responsible fashion.  I hope other UK ports will now follow Teesport’s lead – both our own and future generations will have reason to thank them if they do.”

Operation Clean Sweep® is already implemented across the UK in over 250 sites, which up until now have largely been plastics manufacturing plants. However, the recent announcement represents an important shift, incorporating other companies who handle these materials along the supply chain – ensuring plastics are handled responsibly during transportation.

With headquarters in Middlesbrough, PD Ports has several operations across the UK at key ports including Teesport. One of the major shipping and logistics hubs in the North of the UK, Teesport handles over 500,000 teu a year. PD Ports Chief Operating Officer and Vice-Chairman, Jerry Hopkinson adds:

“As a port, we already have a number of initiatives in place to work with river users to reduce plastic making its way into our environment and our work with the British Plastics Federation reinforces our commitment. Plastics are clearly important for a number of purposes, but it’s important that we all take responsibility for how they are managed and disposed of, so as to not be detrimental to the planet.”

“The British Plastics Federation is proud that PD Ports is the first UK port to sign up to Operation Clean Sweep. We highly value Simon Clarke MP’s involvement in helping to achieve this important landmark. Many manufacturers and logistics operators are putting their weight behind Operation Clean Sweep and we urge other organisations that handle plastic raw materials to follow the fine example set by PD Ports.”