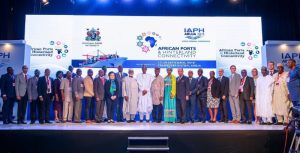 The International Association of Ports and Harbors (IAPH) has held its first regional conference on African soil under the theme “African Ports and Hinterland Connectivity”.

Hosted by Nigerian Ports Authority at the Nigerian capital Abuja, the dedicated conference brings together African ports, port operators and corridor management organisations under one roof to study the interdependent linkage between ports and their hinterlands in the context of Africa, a continent with no less than fifteen inland nations dependent on their neighbours for seaborne access to develop and grow their economies.

In his opening speech this morning, His Excellency Muhammadu Buhari, the President of the Federal Republic of Nigeria, advised African countries to improve on ports infrastructure and utilise all natural maritime endowments to facilitate trade. “I want to implore participants at the conference to see themselves as people opportuned to stand in positions of responsibility on behalf of Africa,” the President said. He emphasised that interconnectivity would improve African countries’ economic competitiveness and that the maritime sector was central to facilitation of trade and total integration of Africa for development.

International organisations including IMO, WTO, World Bank, UNCTAD, European Commission, African Union, African Development Bank and Pan-African Association for Port Cooperation are represented at the conference together with ports from Asia, Europe and the US, to contribute their expertise and involvement in improving hinterland accessibility in Africa using best practice comparisons already on the continent as well as from other parts of the world.

In her welcome to all delegates, Nigerian Ports Authority Managing Director and IAPH Vice President of the African Region Ms. Hadiza Bala Usman commented:  “There is no doubt that Africa holds a special position in the global maritime space. With 39 of the 54 countries on the continent endowed with littoral assets, the development of the continent is to a large extent tied to the optimal exploitation of its vast maritime resources. And since we, as brothers and sisters on the continent are also affected by relatively identical limitations and concerns, this conference gives us the opportunity to explore ways of cooperation for the development of our ports and, ultimately, the economies of our countries.”

The three-day meeting will culminate in the formulation of key resolutions to be presented by the Nigerian Institute of Transport Technology (NITT) with a final communiqué of main outcomes to be facilitated by the Secretary General of the Ports Management Association of West and Central Africa.

“This is the first dedicated conference that IAPH has held in Africa since its new constitution established six world regions. As the world’s second largest and second most-populous continent and with six of the ten fastest growing economies in the world, Africa’s 54 countries and their ports are becoming lynch-pins of future global trade and development. The recent decade has seen investment in African port infrastructure on a scale never witnessed before in the continent’s history. It is therefore a logical step for IAPH to hold this event and I congratulate our Vice-President Ms Hadiza Bala Usman for taking the initiative.”