British Marine paid tribute to its membership at the fifth edition of its British Marine Awards, hosted at a gala dinner sponsored by Dominion Domains on Monday night (17 September), during the 50th anniversary celebrations of TheYachtMarket.com Southampton Boat Show. Seven British Marine member companies were recognised for their commitment to their staff, training and skills development, as well as the very special Marine Charity of the Year award.

The category winners and selected judges’ comments are provided below.

Best Marine Company to Work for – under 20 employees 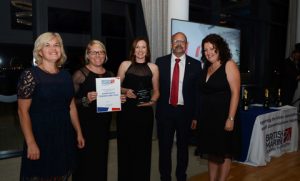 The judges were impressed by the company’s emphasis on creating a positive environment for its employees, where they are empowered to do the best that they can. One employee commented: “They [Superyacht Tenders and Toys] have truly created a fantastic place to work and it is a pleasure to come here every day.”

Claire Richardson, Director commented, “We are thrilled to have received this recognition from British Marine. We try to make work as flexible, enjoyable and rewarding as we can for our team but this, together with the success we have achieved and the awards we have won, would not have been possible without the outstanding dedication, commitment and hard work of the whole team”

Best Marine Company to Work for – over 20 employees 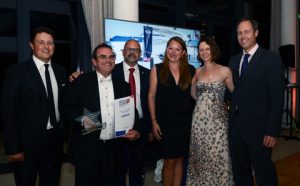 The judges commented that Harken UK still uses the same ethos statement from when it was founded, ‘put your people first and the rest will follow’ (Peter Harken, 1967). Mark Gardner, Custom Project Manager at Harken UK, commented: “I joined Harken because I love our sport and wanted to work for an organisation that mirrors my passion for it.  In 2011 I was lucky enough to be asked to race on J-Class Lionheart. Harken UK made it possible for me to accept this position and seven years on, and one world title later, I am still sailing as part of her crew.”

Managing Director Andy Ash-Vie remarked after winning the award, “We believe in a very simple strategy; “Put your team’s personal growth before company growth”. If the team grows, then the company growth follows. It really is as simple as that and it has been a vital component to our success ever since we set up Harken UK in 1999.  It was so lovely to have this approach recognised by our peers and British Marine. Thank you so much for the award, it means more to us than you can imagine.”

The judges noted the clear training and development opportunities within the company. They were also impressed by its commitment to ensure that every staff member attends a minimum of one training course per year.

Topsail Insurance Managing Director, Chris McGowan: “Topsail Insurance prides itself on the growth of its team and staff members. Four current members of staff joined Topsail Insurance as apprentices and have progressed through the business and are now a valuable part of our international company. We have implemented a successful training programme and provide opportunities for each person to progress and develop their careers. Winning this award comes as nice recognition for us as we have taken on our fifth apprentice who is a great addition to the team.” 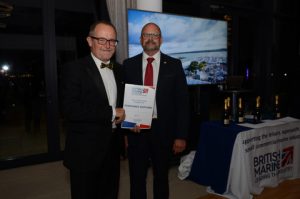 The judges were impressed by the focus that Pendennis Shipyard places on its apprenticeship programme, which provides places to 22 apprentices every year. The judges also highlighted Pendennis’ ‘Management Development Forum’ (MDF), which supports employees who aspire to develop their career within supervisory positions in the company. This Forum is open to all employees at all levels of the company.

Mike Carr, Joint Managing Director commented: “We were extremely pleased to be recognised at the 2018 British Marine Training Awards this week. The inception of our apprenticeship scheme 20 years ago has provided the company with a highly skilled workforce and has contributed significantly to our success today. Our commitment to the training and development of our workforce is fundamental to our future growth and is at the heart of our company’s ethos.”

Marine Charity of the Year 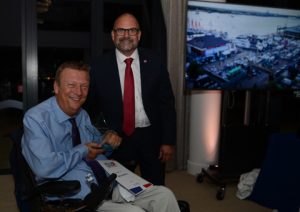 The judges praised Wetwheels for providing access to the water for people with all disabilities, with 80% of participants having never been on a boat before and who would not have access any other way.

Geoff Holt, Chief Executive: “The Wetwheels Foundation is absolutely thrilled and honoured to win the charity of the year award from British marine. This award is particularly important to us because it is made by the organisation which represents boating businesses across the country.

We are very pleased that our efforts have been recognised, particularly the fact Wetwheels is providing the opportunity for so many people with disabilities to access the water, almost 80% of which have never been on the water before.

What we do costs a lot of money and we rely on the generosity and support of the public and businesses to enable us to continue our work. We would dearly love to have more support from the boating community and would welcome the opportunity to speak to British Marine members who might like to support us in some way.”

British Marine’s Chief Executive, Lesley Robinson, praised all the winners and entrants: “It gives us great pleasure to honour these member companies, which have placed such a clear focus on supporting and growing the skills of their employees and creating enjoyable work environments. These member companies are a testament to what makes marine such a great industry to work in.”