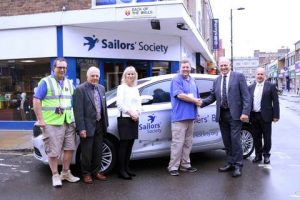 Since its opening, the centre, which is run by a committed team of staff and volunteers, has seen more than 7,000 seafarers walk through its doors.

The centre is designed to feel like a home away from home and gives seafarers visiting Southampton time to relax away from the busy port environment. They can also access free Wi-Fi in order to contact loved ones back home.

Sailors’ Society CEO Stuart Rivers said: “The centre is proving to be very popular with seafarers – in fact, we’ve recently increased our opening hours to keep up with demand.

“We all rely upon the world’s 1.6 million seafarers to transport 90 per cent of the goods we use on a daily basis; the centre gives us a chance to thank them for the sacrifices they make.

“Working at sea and being away from family for months at a time can be incredibly tough, so it is great to welcome seafarers here and help them stay in touch with their family and friends.”

The centre offers a variety of facilities, including a pool table, TV and a kitchen area for seafarers to use.

Late last year, the centre was instrumental in helping a Russian pilot vessel anchored in the Solent amid fears for the safety of 13 crew members on board. The vessel had listed at a 20 degree angle due to severe gales and rough seas.

The coastguard eventually took the ship to a berth in Southampton Harbour. It was still on a tilt which made cooking very difficult for the crew.

During their time there they were visited by centre staff and volunteers who made them aware of the centre and its facilities. After that the crew began to come to the centre to make phone calls, to rest and cook.

The staff also provided special epiphany cakes as their stay in Southampton fell over Russian Christmas.

Sailors’ Society’s deputy CEO, Sandra Welch, said: “It was some comfort for them during a difficult time – when the crew weren’t working, they had a lovely place to go where the staff made every effort to make it feel like a home away from home.”

The anniversary is also being marked by the arrival of a new people carrier to transport seafarers around the city. The people carrier, along with one in Tilbury Port, has been sponsored by the Merchant Navy Welfare Board, Seafarers Trust, Trinity House and Seafarers UK and provided by Viking Garages of West End.

What will you discover at Oi Americas?