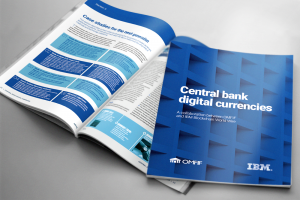 SYDNEY, 25 OCTOBER, 2018: SIBOS – OMFIF and IBM (NYSE: IBM) released the results of a new report describing potential use cases for central banks to support central bank digital currencies. A CBDC is a digital form of fiat money, which is a currency established as money by government regulation. CBDCs differ from ‘digital currencies’, which are not issued by the state and lack the regulations of a government.

The survey of 21 central banks, which ran from July-September 2018, revealed that 54% of respondents believe CBDCs can be used to improve the speed, efficiency and resilience of cross-border payments. Around 69% found significant issues with existing cross-border transaction processes. Other key findings include:

The report also explains the purpose of unifying CBDCs, as well as the motivations and business use cases for central banks to adopt digital currencies. It outlines key characteristics of such a system, including: who the developer and issuer should be; the technology options and requirements for a successful payments system; the practical and regulatory challenges; and the possible risks and policy implications.

Survey respondents came from institutions that are researching and trialling wholesale CBDCs (38%), as well as those who are not currently active in this field (62%). The Banco Central do Brasil, South African Reserve Bank, Norges Bank, Deutsche Bundesbank, European Central Bank and the Bank of Finland were among the institutions that participated in the survey.

‘Today, central banks play an essential role in managing monetary policy, and they will continue to do so as the foundation of stable economies worldwide,’ said Jesse Lund, global vice-president of IBM Blockchain. ‘As we continue to see the advancement of blockchain and how it is applied in various instances across a number of industries, these new use cases indicate that central banks are now willing to explore blockchain, including especially for digital currencies. This will help create added layers of trust and transparency, and quite possibly usher in a new banking era guided by the technology that brings profound new efficiencies to the central banking payments infrastructure.’

‘Many central banks have devoted considerable effort to examining the viability of introducing digital fiat currency as a complement to physical cash,’ said Philip Middleton, deputy chairman of OMFIF. ‘In the wholesale domain, the prospects for digital payment or electronic token exchange appear capable of delivering benefits while avoiding some of the difficulties inherent in retail CBDCs.’

The report provides a holistic view of approaches to setting up a wholesale CBDC and offers guidance for institutions on how to address challenges and achieve success using blockchain technology and digital currencies.