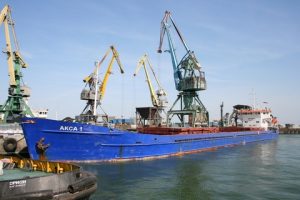 The fall should be attributed to business decline in foreign trade markets dealing with the port’s key types of cargo, coal and metal, and to seasonal shift of oil cargo to river ports.
Handling of general cargo fell by 35% to 116,000 tonnes. Transshipment of ferrous metal has dropped by 42% to 59,000 tonnes. Handling of cargo in big-bags decreased by 26% to 57,000 tonnes.

The decline trend was also seen in liquid bulk segment. Volume of this type of cargo plummeted by 42% on the same period a year earlier to 49,500 tonnes.

About Taganrog Sea Commercial Port
Taganrog Sea Commercial Port JSC (TagSCP, member of UCL Port, a stevedoring division of the international transportation group UCL Holding) is a key stevedoring company operating at the port of Taganrog. The company operates at the port’s Berths No 1, 2, 3, 4, 5, 7 and 8. In 2017, TSCP handled 1.59 million tonnes of cargo.