The BDI (Baltic Dry Index) gained 11 points and now reads 1,020 thanks to the odd Capes’ rise. Geopolitics are getting sour with BREXIT becoming a far more than a perplexed play – Tragedy? Comedy? With a bit of Byzantine ..flavour, Italy creating further issues in the EU – and rightly so with its budget and many many more other issues which one way or another affect our lives and the Shipping Adventure! John Faraclas’ daily recap:

The Capes’ 67 points plus doesn’t come this time as manna from heaven. I can see many raised eyebrows and verbal concerns with all those talking today but also since the beginning of this year. With the BCI now going over and above the 1,000 threshold – which was lost yesterday after a long time, at 1,007 points let’s see what’s next…

All other dry indices fell; the Panamaxes’ BPI was down 18 points at 1,466; the Supras’ BSI – surprise surprise was down 12 and now reads 970 points! The Handies’ BHSI loss was minimal, as usual – minus three point at 649!

This odd market’s “strength” is no evidence of a “strong”, healthy and sustainable dry market to come,  following the over 1,000 points lost from the Capes and conversely from the BDI in the last two weeks more or less, but a possible bubble that might – let’s hope it doesn’t – end in another crisis; CAUTION as something doesn’t match the situation. How come we had a triple digit loss the one day and then a rise the next from the Capes ONLY when all other indices fell? We have many times stressed in all our reports the fact that one size/type doesn’t constitute a Market!

So let’s see what else we are going to witness amid the Environmental and costly demands – scrubbers etc etc which deep down although they sound good and proper they don’t address the issue as they should!

The Wets were both down; the last published BDTI (Dirties) and BCTI (Cleans) stood at 1.091 – minus nine  and 651 – minus one respectively.

The WTI took a …twist and turned upwards at US$ 56.46 destroying the hopes of the 6.8 billion poor on the Planet Ocean who CANNOT afford high oil prices… for heating, cars and motor bikes – needless to mention small business and factories… 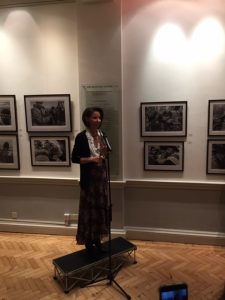 On the Geopolitical front the MIGRANTS retain the lead as the most important and crucial issue and it is a MUST to sort things out. On both sides of the Atlantic  the MIGRANTS issue becomes more than  an issue.

We were pleased and “fortunate” to attend the private view of world acclaimed photographer Margarita Mavromichalis in London’s Hellenic Centre on “Lesvos – between hope and despair” depicting in black and white the harsh reality of the MIGRANTS on this Greek Eastern Aegean Island a few miles off the Anatolian Coast (Turkey).

Never ever before the Friends room there were so many people there! We will revert with a full account and many pictures asap.

Afterwards at the Main Hall, the Anglo-Hellenic League presented Anastasios  P. Leventis CBE OFR, Chairman of the A G Leventis Foundation who delivered an exceptional slides speech on “Climate Change, Biodiversity and the Need for action in today’s Hellenic World.” 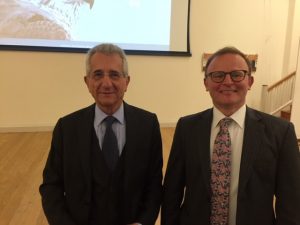 We will also revert on this event soon. On both events it was good to see so many guests, many old friends –  diplomats had their day  and a great honour to have the Secretary-general of the IMO Kitack Lim …heading the international shipping fraternity!

This is a photographic exhibition NOT to be missed! The truth shines!

Have a nice evening and remain on guard from actions emanating from Pirates, Terrorists and any Criminals whatsoever wherever you are on Planet Ocean!