HESGB autumn lunch back at The Real Greek 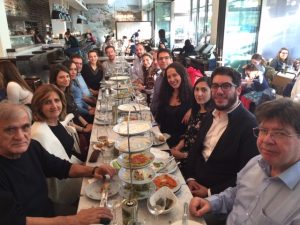 The Petros Kontraros’ table; the most crowded one…

The second post-summer social event of the HESBG (Hellenic Engineers Society of Great Britain) – following the Founders Arms at the south bank of Father Thames drinks and dips do two months ago, returned after three years, to The Real Greek but this time the branch at Westfield supermall’s southern terrace. The Westfield venue offered more than ample space to accommodate the increased number of participants given the Saturday demand for tables. 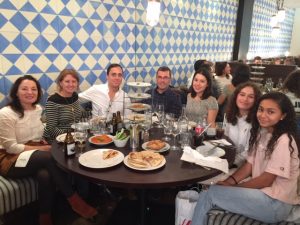 Nearly 120 members, friends and guests turned out – an impressive turnout given Saturday is very much a family day in Britain! Above all it was good to see the president back as he has become a flying Dutchman… so to speak; well done Dimitri Monioudis. Flanked by his “trusted lieutenants” – among them in alphabetical order Kostas Amarantides, Giorgos Foustanos, Christos Kottas, Alex Xenakis  and Evan Zaranis, the president Dimitris Monioudis looked more than content with the gathering and its success! 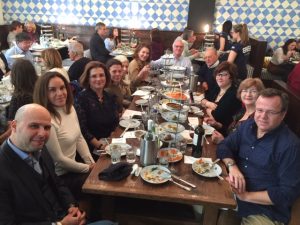 Above all we had the new generation present, many youngsters and that was more than an encouraging boost for the HESGB’s progress and success. This is the big HESGB family!

Excellent and more than plentiful Greek food – cold starters (greek μεζέδες) with a woooow pitta bread opened our appetite and with a couple of drinks when the main multi-variety course arrived it become what you all know: a Greek feast in its entirety. Jovial mood is jovial mood; Greek festive mood with mariners et al is the name of the game! Did I hear you say: desserts… Greek coffee too which is distinct from what many call Turkish coffee – with all due respect, no comparison! 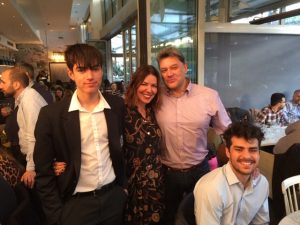 Good … “housekeeping” for a restaurant by the manager Elena Apostolidou, who is by the way doing her Masters in politics and international relations at UCL – she was everywhere at all times directing the waiters and waitresses trying also to keep everything on time and everybody happy!

It is always good to see old friends particularly in London who mostly are involved in the shipping adventure, or businesses having to do with shipping; shipping encompasses everything – art, banking, education, medical you name it. 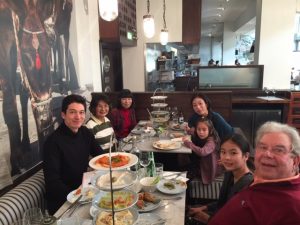 This time, keeping an eye… err an ear on the discussions and networking I am “conveying” you the overheard noticeable …issues: first and foremost was networking! The BREXIT saga with too many views; the situation in the shipping markets particularly the environmental questions with 2020 and the …scruuuuubbers, the current Greek situation, Christmas …arrival and the forthcoming, on the 23rd of February of the 24th annual dinner and ball that the society organises at Grosvenor House; make sure you book early! 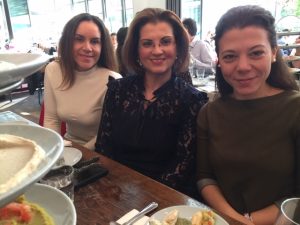 Have a nice evening and a peaceful weekend!