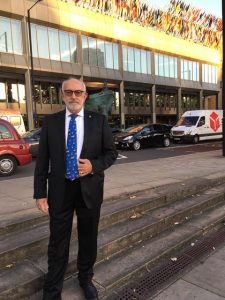 Evolution not revolution. Autonomous and remote-controlled ships are being trialled but seafarers, for now, remain indispensable to safe shipping. These were key takeaways from a special session (3 December) of IMO’s Maritime Safety Committee, which is celebrating its 100th session.

Delegates were first treated to a song commemorating IMO’s 70th anniversary (since the Convention establishing IMO was adopted in 1948) as well as the MSC 100 session. Then a specially-commissioned IMO video reminded representatives of IMO Member States, IGOS. NGOS and invited guests of the wide spectrum of work the Committee has done over six decades to enhance safety and security at sea, including navigation, cargoes, ship construction, seafarer training, search and rescue and communications and more.

IMO Secretary-General Kitack Lim outlined the history of the Committee, since it first met in 1959, then formed of just 14 Member States. Today the Committee consists of all IMO Member States. “Thanks to the unwavering commitment to reduce the number of marine casualties and incidents, not least demonstrated by the efforts of this Committee throughout the years, and with the unique IMO spirit of cooperation that is perhaps particularly true for the work of this Committee, we have come a long way in ensuring the safe and secure operation of international shipping,” Mr. Lim said.

“As we look towards the future of the MSC, a number of key issues are on the table before us. They will require our combined continuous efforts to reach sound, balanced and timely decisions, in order to continue the long and impressive record of this Committee’s work over the past 100 sessions,” Mr. Lim said.

Kevin Daffey, Director Ship Intelligence and Engineering & Technology, Commercial Marine, Rolls-Royce plc, kicked off the vision of the future with videos showing the trial – earlier the same day – of a fully autonomous ferry on a voyage between Parainen and Nauvo, Finland.  The ferry navigated in fully autonomous mode and under remote control operation. Plenty of ships will continue to have people on board, he said, but marine engineers are opening the design envelope to make these ships more effective and more efficient.

“Are seafarers indispensable?”  –  this was the key question posed by Mr. Branko Berlan, Accredited Representative of the International Transport Workers Federation (ITF) to IMO. His message was that seafarers are still key to safe and secure ship operation. The accident/incident rate for international merchant ships is less than 5% of all ships per year, he pointed out. Seafarers are prepared for new technologies and automation, he said. “It is happening: it is not revolution, it will not come tomorrow or next week; it is evolution,” he said. Seafarers are ready to accept technologies, if they are proved to be safer than what we have now.

In the debate that followed, delegates raised questions about search and rescue operations which might involve autonomous or remote controlled ships and how collision regulations would be complied with. Most believed that remote controlled or autonomous vessels would initially operate close to shore. The MSC is carrying out a regulatory scoping exercise on to look at how the safe, secure and environmentally sound operation of Maritime Autonomous Surface Ships (MASS) may be introduced in IMO instruments.

Closing the special session, former MSC chair Tom Allan reminded delegates of their responsibility as the people involved in “probably the most important safety committee in the world” – when it comes to safety of life at sea. “Not only this session, but the next 100,” Mr. Allan said.