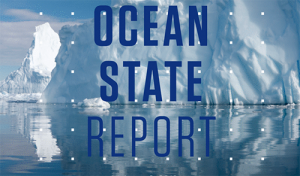 Dramatic changes in the extent of sea ice at the poles, huge variations in the ocean circulation in the Atlantic, a sharp increase in carbon uptake are some of the more sobering findings detailed in a comprehensive new report published as a supplement of the Journal of Operational Oceanography (JOO), one of the Institute of Marine Engineering, Science & Technology’s (IMarEST) peer-reviewed academic journals.

Issued as an annual JOO special supplement, the Copernicus Marine Service Ocean State Report charts physical changes taking places in the world’s ocean over several decades. With particular focus on the more pronounced variations recorded in 2016, the second edition arrives in the wake of a number of record-breaking extreme weather events across Europe. The Copernicus Marine Service has also published a summary of the report designed to boost ocean literacy amongst the general public and decision-makers.

The interaction between oceans and the atmosphere plays a key role in the Earth’s climate system, so a deeper understanding of these dynamics is critical to developing an effective response to global climate change.

More than 100 scientific experts from more than 30 European research centres contributed to the work, drawing on empirical data gathered from satellite and in-situ measurements as well as numerical models as part of the European Union’s Copernicus Earth Observation programme. Mercator Ocean International, a centre for ocean analysis and forecasting, is the entrusted entity selected by the European Union to implement the Copernicus Marine Service. By analysing this unique corpus of data, researchers seek to interpret and describe the natural variations in the ocean as well as changes in line with climate change.

The finished 150-page report is intended as a reference document on ocean health and ocean climate for stakeholders across the marine scientific, business and policy communities. It will assist national and regional authorities to prepare more effective strategies to deal with challenges such as sea-level rise. It will help businesses in the Blue Economy to better understand and anticipate changes in the environment in which they operate and work. The findings will also inform and stimulate further research in scientific circles.

The second edition draws attention to the rising heat content of the global ocean and the European regional seas. Corroborating previous studies, the new research indicates that the volume of sea-ice in the Arctic is declining by an estimated 15.4% per decade. It reveals a drop in the extent and volume of Antarctic sea-ice in late 2016, unprecedented in the history of satellite observation of the region. This startled scientists as it had previously been slowly but steadily growing. The authors suggest that the cause could be due to a complex interplay of variations in ocean hydrography and air-sea-interfaces.

The report goes on to chronicle the large variations in the Atlantic Meridional Overturning Circulation (AMOC), a sweeping ocean conveyor system that circulates water throughout the Atlantic. These powerful currents fuel the Gulf Stream, warm cities in continental Europe and North America, affect sea-levels and bring nutrients up from ocean depths that help sustain marine ecosystems and fisheries. The strength of the AMOC weakened since 2005, which is driven by long-term variability rather than an ongoing trend. The Gulf Stream has decelerated over the past 25 years.

The document also reports a sharp uptake in the amount of CO2 absorbed from the atmosphere and stored by the ocean since the beginning of the 2000s. Whilst this carbon sink function performed by phytoplankton is seemingly helpful in mitigating anthropogenic CO2, there is a price to pay in the form of ocean acidification. Often referred to as climate change’s ‘Evil Twin’, ocean acidification will have a devastating impact on biodiversity, and knock-on effects on fisheries and aquaculture, threatening food security for millions of people worldwide.

IMarEST chief executive David Loosley commented: “While we often think of oceans as conduits for global trade, they play an intrinsically more important role in weather systems and climate that ultimately sustain life on Earth. In addition to long-term, state-of-the-art monitoring and cross-disciplinary research, devising better management approaches calls for sustained and objective science-based reporting on which to base policy decisions. IMarEST is proud to contribute to these efforts through the publication of the Copernicus Marine Service Ocean State Report.”

Published periodically, the Journal of Operational Oceanography disseminates the latest research into a range of maritime environmental issues as explored through the lens of ocean science. To learn more and subscribe, visit: www.tandfonline.com/tjoo.

Download the executive summary and overview of key findings