American Club sails on steadily without need of premium rises 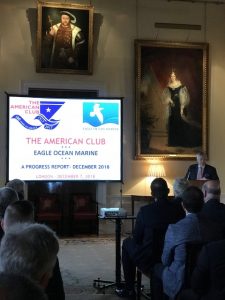 Steady as she goes – this was the main message from Joe Hughes, chairman and chief executive for Shipowners Claims Bureau, managers for the American P&I Club when he delivered the annual progress report on the club and the fixed premium facility Eagle Ocean America to brokers and other marine interests in London.

One of the chief manifestations of the stability theme has been the recently-announced decision by the club board to set an unchanged P&I rate of zero for the policy year beginning February 2019 – in common with other members of the International Group of P&I Clubs.

Mr Hughes, who has in recent times overseen healthy growth in tonnage entered in the club, said: “Much has been achieved in recent years.” There was a disciplined approach to risk selection and rating, with continued emphasis on loss prevention and claims control. There had been prudent diversification into new business sectors – Eagle Ocean America and American Hellenic Hull.

Eagle Ocean America, managed by Eagle Ocean Agencies, writes fixed premium protection and indemnity and hull coverages on brown water and green water vessels operating in the US. The facility is backed by security of the Stratford Insurance Co, a member of the Western World Insurance Group, part of Validus Holdings.

Mr Hughes said there was “uncompromising solidarity with members of the club, in uncertain times.” Staying ahead of the service curve was vitally important.

The club is proud of the strength of its free reserves per ton, saying that this compares well with industry norms.

After a meeting of the board, which is chaired by George Gourdomichalis, in November 2018, said that for the forthcoming policy year, for mutual P&I, expiring estimated total premium would have no general increase.

The component of premium represented by the club’s International Group reinsurance arrangements for 2019 would be adjusted separately.

All fixed premium P&I and damage to hull entries (for example those for charterers’ risks) to would have no general increase. The same zero decision is applied to fixed premium FD&D Insurance . 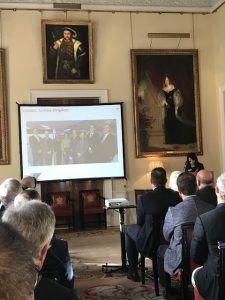 For the 2019 policy year, as was the case 12 months earlier, no standard increases or minimum amounts should apply to any expiring deductibles, “out of a desire to extinguish the economic burden on members of such mandates,” said the board.

Where from a claims performance or general risk perspective, a member’s terms of entry might warrant an uplift in deductible levels, such action would be taken in individual cases.

Mr Hughes said in a circular: “The overall direction of the global freight markets remains ambiguous.  While there are signs of growing confidence in several sectors, optimism as to the sustainability of the current expansion of seaborne trade has been tempered by concerns over rising geopolitical and macroeconomic tensions.

“Against this shipping industry background, premium softness in the marine insurance space has persisted.  However, the relentlessly downward momentum of P&I rates caused by the ‘churn effect’ appears to have abated somewhat as the pace of newbuilding deliveries has slackened, and the withdrawal of capacity from the hull markets may presage some uplift in overall risk pricing over the months ahead.”

Mr Hughes went on: “Whether the intersection of these trends will ultimately represent a positive inflection point for marine insurers remains to be seen.  Nevertheless, the indicators currently emerging could imply that the bottom of a lengthy cycle of insurance pricing weakness may finally have been reached.”

The American Club’s retained losses for the current year to date are said to be developing very favourably.  Claims in the aggregate for the club’s own account as of mid-November 2018, at $14.6m were 23% less than the total for the previous year at the same stage.

Investment earnings for 2018 to mid-November recorded a marginally positive result (+0.12%), but markedly lower than the figure at the same point 12 months earlier (+6.2%).

However, premium revenue for the club had grown by about 2% since the beginning of the 2018 policy year, coupled with a tonnage rise of approximately 1%, connoting an increase in the average rate per ton for P&I entries of about 1%.  Given the market-wide decline in average premium rating experienced over recent years, and in view of market conditions generally, there were grounds for cautious optimism that P&I risk pricing was gaining a firmer footing as the new policy year approaches.

After consolidating the start-up costs of American Hellenic Hull Insurance into the figures, and in view of some deterioration in the claims results for the 2017 policy year, the club’s overall surplus declined by $5m as of September 30, 2018, the end of the third quarter traditionally representing the lowest point in the cycle of surplus development.

The board was encouraged by the continuing success of the Eagle Ocean Marine fixed premium brand, which is underpinned by reinsurance at Lloyd’s and remained solidly profitable, and of its investment in American Hellenic Hull Insurance, which had exceeded original growth and other financial projections as well as providing the club with fruitful cross-selling and other business development opportunities.

Eagle Ocean Marine, operated by Eagle Ocean Agencies, offers P&I and FD&D cover for policy limits up to $500m and $2m respectively, mainly for operators of smaller ships in local and regional trades excluding those based in the US or trading exclusively in US waters. 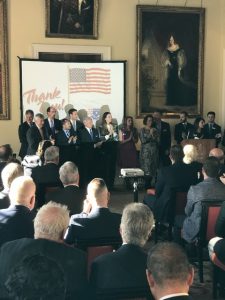 All on board for closing moments of presentation.

In a report on the wider P&I scene earlier in 2018, ratings agency AM Best said: “As clubs compete to retain tonnage, their service offering is an important differentiator. In AM Best’s opinion, those that manage to consistently deliver value to their members through superior claims handling, knowledge of local markets or loss prevention advice, and all the while maintaining a strong level of capitalisation, will have a competitive advantage over their peers.”

During the London meeting, congratulations were offered to Shipowners Claims Bureau officers who had recently gained promotion.  They included Dorothea Ioannou on her appointment as chief commercial officer, in which role she is responsible for implementation, coordination and oversight of the overall commercial strategy of the organisation. Since 2015 Ms Ioannou has been global business development director, and from 2009 responsible for business development from the club’s Piraeus office.