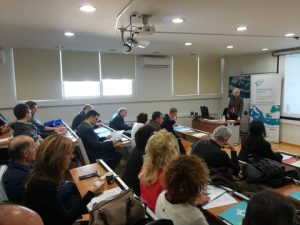 From the seminar room of TEI Heraklion, Crete, where the event took place.

The European co-funded Poseidon Med II programme (PMII), organised a workshop at the Technological Educational Institute of Crete (TEI) in the context of its dissemination activities. The subject of the workshop, which took place on December 17th, 2018 was to present the appropriate framework for the adoption of Liquefied Natural Gas (LNG) as a marine fuel in the Eastern Mediterranean.

The event was opened by the Rector, Mr N. Katsarakis and was followed by a welcome note by the President and Managing Director of the port of Heraklion, Mr. A. Philippis. The event was attended by Professors and students of the Technological Educational Institute of Crete, as well as representatives from the Port Authorities and other stakeholders from the port of Heraklion. 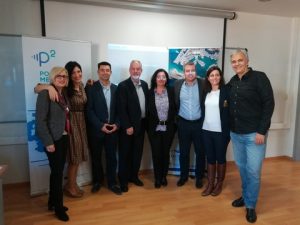 A photo of the Partners of PMII following the presentations.

The links comprising the LNG supply chain that is the subject of the studies of PMII (M. Fotiadou, DEPA), the measurements of air pollutants at the port of Heraklion (A. Mitsotakis, CERTH) and the contribution of the large scale LNG infrastructure at Revythousa towards the successful development of small-scale LNG infrastructure in the ports of the programme (T. Eleftheriadou, DESFA), were some of the issues presented by the PMII partners. The studies of the programme on the selection of the optimum position for small-scale LNG facilities within the Heraklion port (A. Boutatis, ROGAN), shipbuilding and ship conversion studies for the use of LNG (G. Pratikakis, NAP) and the regulatory framework for LNG bunkering operations (A. Kouvertari, Lloyd’s Register) were also discussed.

What is Poseidon Med II project?
Poseidon Med II project is a practical roadmap which aims to bring about the wide adoption of LNG as a safe, environmentally efficient and viable alternative fuel for shipping and help the East Mediterranean marine transportation propel towards a low-carbon future. The project, which is co-funded by the European Union, involves three countries Greece, Italy and Cyprus, six European ports (Piraeus, Patras, Lemesos, Venice, Heraklion, Igoumenitsa) as well as the Revithoussa LNG terminal. The project brings together top experts from the marine, energy and financial sectors to design an integrated LNG value chain and establish a well-functioning and sustainable LNG market.

Row4Ocean: Day 7 in the Atlantic