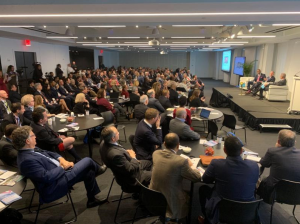 “Culture attracts capital faster than capital attracts culture,” noted Bloomberg, a former three-term mayor of New York City, part-time Bermuda resident, and founder of Bloomberg LP and Bloomberg Philanthropies. “We do a lot of business in Bermuda because there are a lot of financial institutions that need Bloomberg terminals, so it’s a logical place to go. Bermuda is a relatively easy place to do business. And as long as the insurance business keeps growing in Bermuda, I think our business will keep growing there.

“Bermuda is a great country, a cohesive society. Where else I would I do business on an island? Maybe Manhattan island!” he joked. “I think Bermuda’s got a much better hand to play than most.”

The session was a highlight of a day packed with informative panels showcasing the Bermuda market’s expertise across myriad industry sectors and attracting a 350-strong audience of executives and investors to the midtown venue off Times Square. More than 40 speakers from the island, comprising government, industry and regulatory leaders, outlined global trends and the unique combination of factors that set Bermuda apart as a jurisdiction of choice for global business. The forum was the fifth in a successful series hosted in different cities by the Bermuda Business Development Agency (BDA).

“I think we have a great story to tell and getting out in a forum like this, and getting someone like Mike Bloomberg ,whom everybody holds in the highest esteem, and having him talk about how great it is to be in Bermuda, how he feels about Bermuda compared to other places, I think that’s valuable,” noted Duperreault, the Bermudian market veteran who is currently President and CEO of American International Group (AIG).

“Bermuda is home to me. My business is also very much involved there,” he said, noting AIG is celebrating its centennial this year, including more than 70 years on the island. “Bermuda is a great place to work and live and its culture is deep. Its proximity to the US, the business relationships we have, all of these things add up to providing a venue that’s the best to me for what I do.”

The forum featured moderated panels of experts in Bermuda’s key industries, from re/insurance and asset management to trusts, family offices and fintech, as well as networking opportunities. The island’s historic and mutually beneficial relationship with the United States was the common theme across all discussions.

“New York is the most important city worldwide when it comes to capital markets, and it’s a city we have numerous links to. That’s why we’re speaking to potential customers and describing why Bermuda is a jurisdiction that can help them return value to their shareholders,” said the Premier Burt, who was joined by Finance Minister Curtis Dickinson at the event. “Having industry titans with us such as Brian Duperreault and Mike Bloomberg demonstrates how important Bermuda is to America and to American citizens. We must grow and build on those relationships.”

The forum’s keynote was TED speaker, entrepreneur, and award-winning author Jared Kleinert, who engaged the crowd with a talk about millennials and how they view careers, risks and achievements. “As an American and as a former resident of New York with family ties to this city, it was exciting to see Team Bermuda visit us,” he said afterwards. “For the BDA and for Bermudians to go out into markets they value building relationships with, it speaks volumes.”

Numerous business development meetings and introductions also took place at the venue during the forum, which concluded with a networking reception.

“It’s been an impressive day,” said the BDA’s CEO Andy Burrows. “The Premier’s fireside chat with Mr. Bloomberg and Duperreault highlighted the importance of the US-Bermuda relationship. It was striking and it was a theme that carried throughout the day. Our relationship with America is old, it’s still maturing, yet it is also very dynamic. We look to the US as a partner economically and politically. Historically, we have invested in and supported each other’s economies. Clearly, it is a relationship we must continue to nurture and grow.”

“The bilateral relationship between New York and Bermuda is among the most important in the world,” agreed BDA Deputy Chair Steve Weinstein. “From our leadership in response to the 9/11 tragedy to the efforts Bermuda made to the rebuilding of lower Manhattan after Superstorm Sandy, New York has been a critical market to Bermuda and an important part of extending the global franchise for Bermuda as the world’s risk management capital. As Bermuda expands into adjacent sectors, I’m confident that relationship will only grow.”

The visit to New York also saw Premier Burt, Minister Dickinson and Burrows meet with major media groups in New York, including Coindesk, Barron’s and The Economist, whose journalists were interested to learn details about Bermuda’s economy and what differentiates it to encourage nascent digital asset, blockchain and fintech companies to set up on the island.

What a week that was with the BDI falling, Panama Maritime successful conference and perplexed Geopolitics…