“K” Line: Message from the President on the 100th Anniversary 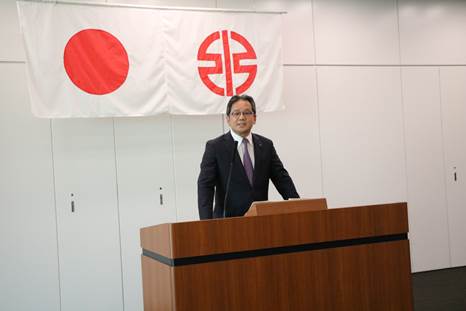 “K” Line: Message from the President on the 100th Anniversary

Officers and employees of “K” LINE Group, taking this opportunity of the 100th anniversary, I, the President and CEO of the company, would like to make a speech on behalf of you all.

Today, April 5, 2019, is precisely 100 years after April 5, 1919 when the foundation shareholders meeting of Kawasaki Kisen Kaisha, Ltd. was held. A few years before that, in 1914, Kawasaki Dockyard Co., Ltd. (the predecessor of Kawasaki Heavy Industries Ltd.), which would become our parent, started business by building and owning many stock boats in anticipation of rapid increase in demand for new ships following the outbreak of World War I. However, although this stock boat strategy worked well at the beginning, it went wrong as the war ended earlier than expected, resulting in an excess of ships. Taking this opportunity, on April 5 1919, Kawasaki Dockyard established a shipping company through contribution in kind with 11 ships, and three days after that, on April 8, submitted the “notification of commencement of business”, thus Kawasaki Kisen Kaisha Ltd. took its first step as a shipping company.

Now, I would like to present an episode at birth of the company. In the Fifty Years’ History of “K” LINE, there is a description, “Selling newly built ships overseas would only give profits to foreign shipping companies, which was undesirable. We believed that, in the interest of Japan’s national development, the company had to retain newly built vessels for use by Japan and set up a large shipping company capable of rivaling Nippon Yusen (NYK) and Osaka Shosen (the predecessor of MOL) to launch a ship operation enterprise.” Our company was born taking advantage of adversity, that is, the “excessive amount of stock boats”, and here I recognize the origin of the “K” LINE Spirit.

Under the “K” LINE Spirit, that is, “enterprising spirit”, “broad-mindedness” and “independence and autonomy”, taken from generation to generation since its founding, “K” LINE has developed business and expanded operations overcoming a great number of challenges. It was in a desperate situation when the Pacific War dealt a devastating blow to the company’s fleet and the lives of many crew members were lost. By salvaging and reviving the requisitioned and half-sunken “KIYOKAWA MARU” as the main force to restore the company’s business, “K” LINE could overcome adverse circumstances after the war.

In the 1960s when Japan went through rapid economic growth, while the demand for transportation of resources and raw materials significantly rose as industrialization moved forward and improvement in living standards proceeded, “K” LINE actively promoted the upgrade of the tanker fleet and building of specialized carriers for transport of iron ore, coal, lumber, grain and so on. When consideration was given to specialized ships, enhancement of service quality and improvement of transport efficiency were always aimed at in response to the demands of customers and with a flexible mindset. Taking the field of transport of automobiles as an example, until then, car bulkers were generally assigned, which secured the revenues in both directions by exporting cars from Japan and loading bulk cargo such as grain on their way back. However, in the 1970s, by building “TOYOTA MARU No. 10”, Japan’s first pure car carrier designed exclusively for completed car transport, damage to the cargo by conventional loading and unloading was largely eliminated. In addition, a dramatic improvement in service quality was realized by avoiding delays in schedule due to the waiting time for return cargo or weather. In the field of energy transport, in 1983, “K” LINE handled the first operation to transport LNG by sea at minus 162 degrees Celsius by “BISHU MARU”, Japan’s first LNG carrier. In 1994, listening to requests by domestic power companies and in order to embody such requests, the first wide-beam/shallow draft coal carrier “CORONA ACE” was built, which became the industry standard for thermal coal transport. As for containership services, by commencing the first intermodal transportation by double stack trains by a Japanese shipping company in North America in 1986 and so on, “K” LINE was nicknamed “WARESAKI (To-be-first) KISEN (Line)” by demonstrating its “enterprising spirit”, and has always been trying to be the leader of the industry. “DRIVE GREEN HIGHWAY”, which was built as an environment-friendly flagship featuring advanced integration of various environmental technologies, should be still fresh in your memory.

In the second half of the 1980s, skyrocketing energy costs due to the oil crisis and the emergence of ocean shipping industries in developing countries happened simultaneously, then, further worsening the situation, the Plaza Accord was concluded in 1985 which led to the rapid appreciation of the yen. In 1995, an exchange rate of 79 yen to the U.S. dollar was recorded, which resulted in the rapid decline in the international competitiveness of Japanese ocean shipping companies including “K” LINE, who had to pay the cost in yen and obtained the bulk of their revenue in foreign currencies. Since then, we have been tossed about by declines in demand due to drastic changes in the domestic and international economic situation such as the Asian currency crisis and global financial crisis caused by the Lehman Brothers bankruptcy when demand evaporated overnight. We have suffered various hardships including the global glut of ships due to large orders during the shipping boom in the first half of the 2000s. Every time we faced difficulties, while taking various painful measures such as emergency employment measures, drastic business restructuring including business transfer to overseas offices and radical cost reduction, we have overcome many difficulties with the officers and employees working together in the corporate culture of “Broad-mindedness”.

This fiscal year is the last year of the current medium-term management plan, “Revival for Greater Strides”, and we will continue focusing on the three priority initiatives, which are “Rebuilding Portfolio Strategy”, “Advanced management and Strategy” and “ESG initiatives”. Due to big changes in the business environment, as a review of the business portfolio in response to such changes, we spun off our containership business last year in order to enjoy the advantages of large-scale business and to further enhance competitiveness by promoting business integration with two other Japanese shipping companies. On the other hand, in domestic port transportation and logistics businesses, the introduction of capital and knowledge from outside was promoted through collaboration with Kamigumi Co., Ltd. and so on. Both of them were to proceed with “selection and concentration” with a clear vision to make the best of “K” LINE’s strengths. In addition, as announced last month, we are making efforts to improve cost competitiveness by structural reforms such as disposal of uneconomical fleets and sale of non-core assets. Now, this will be an important year to realize thorough concentration of management resources in four business pillars, which are Dry Bulk Business, Energy Resource Transport Business, Car Carrier Business and Logistics and Affiliated Business, and their redistribution in order to strengthen our solid revenue base and to complete the rebuilding of our portfolio strategy.

The series of structural reforms we have been tackling are the settling of past investments and the introduction of sophisticated business management based on reflections, in order to realize thorough risk management. Specifically, “K” LINE’s fleets and business risks will be assessed systematically by market performance over many years. Each investment will be evaluated by quantification by the same measure, and realistic investments will be implemented by controlling the total risk. In addition, by proceeding step by step with the recovery of owned capital which was damaged by the structural reforms, and with strengthening of the financial structure, “Revival for Greater Strides” must be completed.

In order to further consolidate the existing relationship with customers, the Corporate Marketing Strategy Division and the AI/Digitalization Promotion Division were established. Also, in the future, we will be aware of our customers’ needs to realize convenience and improvement in quality of our services by coordinating them with advanced technology. As for safety in navigation which is the basis of “K” LINE’s service, it is necessary to refine safe and high-quality transport services by incorporating cutting-edge information technologies such as utilization of big data and AI, while making use of tangible knowledge cultivated over many years. It is also important to give the utmost consideration to the environment and to take responsibility as a member of a sustainable society.

In order to promote the measures I have just mentioned, while keeping our eyes wide open to take a broad view of the situation in this turbulent time, we want to continue our efforts to gain customers’ perpetual trust as ocean shipment professionals, who also are capable of presenting solutions backed by close preparations. What we learn from the past is not successful experiences, but the source of our predecessors’ ideas and their spirits always willing to reexamine and change their ways. With a flexible mindset and daring spirit, each individual improves one’s own ability and work hard together. With strong teamwork among the officers and employees of the Group, let’s do our best together to enhance the enterprise value in an “enterprising spirit” and with swift actions, so that we will be called “WARESAKI KISEN” again.

Finally, today, when the significant milestone of the 100th anniversary is marked, taking this opportunity, I would like to express my sincere gratitude to all the stakeholders including our customers, business partners and shareholders who have given their continuous support to the “K” LINE Group. Furthermore, I would like to pay a tribute to our predecessors who overcame numerous difficulties to establish the solid brand of “K” LINE, and to conclude my message by expressing the high spirit to make history in the next 100 years together with the officers and employees of the Group taking pride in being a member of the new “K” LINE. Thank you.

New guidance is now available to assist welfare organisations dealing with incidents of seafarers being abandoned and vessels being arrested or detained.