‘The Smell of Money’, ‘Law of the Border’ and more at Turkish Film Week 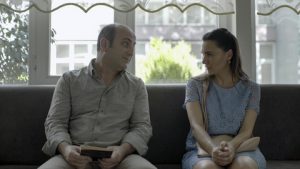 ‘The Smell of Money’, ‘Law of the Border’ and more at Turkish Film Week

Who invented money? The question is blurted out by an impecunious drunk in a scene from a brilliant new film sparkling among a constellation of new productions from Turkish directors.

In his slurred stab at the answer, this incidental character guesses it was the ancient Phrygians, a Thracian race in Asia Minor in 1200 BC — their most famous king being Midas, who in Greek legend turned everything he touched – everything – to gold. Black Sea scene from The Smell of Money.

He is corrected by the kind-hearted taxi driver around whom the film revolves, and who must have taken his cue from the Greek historian Herodotus in allowing that the Lydians in the seventh century BC were the first to use gold and silver coins in parts of what is now Turkey.

Current cinematic dramas are hardly known for a reference, even a passing one, to the ancient kingdom of Lydia.

This little detail demonstrating the perceptiveness of the best réalisateurs comes from the film entitled The Smell of Money. It was screened during the second annual London Turkish Film Week from 24-30 April 2019. 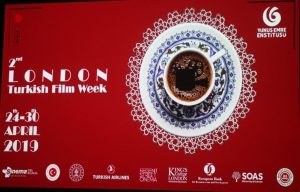 The 100-minute fast-paced drama is directed and edited by Ahmet Boyacioglu, and one would expect an incisive approach from a man who graduated in medicine to spend 20 years as a general surgeon before devoting himself to cinema. He stitches together seamlessly in one movie all the genres: comedy, romance, crime, mystery, suspense and terror.

The London festival included a dozen feature films and documentaries, culminating in a remarkable restored gem, Law of the Border, a signature work in 1966 of one of Turkey’s greatest directors.

Shown as part of the cultural programme of the European Bank for Reconstruction and Development (EBRD), The Smell of Money(Turkish title Paranin Kokusu) appears to have lost nothing from the way it is subtitled in English. Its message is that succumbing to greed may end in blowing apart people’s lives. 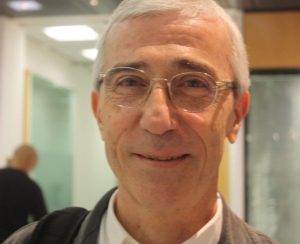 It starts in comic tone, but tension rises until everything ends in mayhem. The diffident but lovable cab driver Mehmet (played by Murat Kılıç) begins to fall for his new neighbour, a spirited single mother (Şevval Sam). Mehmet, who picks up fares in the suburbs of Ankara and from the airport tells his friends of unlawful doings carelessly talked about by his passengers, including crooked businessmen and a student who is part of a call girl racket.

Mehmet and two friends install simple technology in the cab to bug their unwitting fares. The proceeds of a successful blackmail operation go to their heads and they hand out largesse around their neighbourhood. They get too deep into illegality when they discover a dossier dropped by a member of a deep-state organisation. 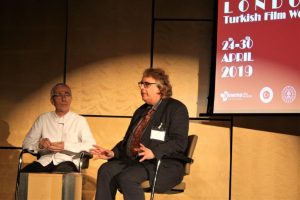 The film says it describes fictional events, but “life is made up mostly of fiction.” The words Pecunia non olet (money does not stink) are attributed to Roman emperor Vespasian, and it is the use to which the lucre is put that smells. That gives rise to phrases such as dirty money, money laundering…

A final scene of the low-budget but absorbing film sees the surviving protagonists hoping to rebuild what they can of their shattered dreams by the coast: in the town of Sinop on the Turkish side of the Black Sea in the ancient region of Paphlagonia. At the film presentation at EBRD.

Ahmet Boyacioglu is a leading figure in Ankara Cinema Association. His debut feature film in 2010 was Black and White, based on the real-life Ankara art gallery and cafe Siyah Beyaz (Black and White) and the regulars at the bar.

In a post-screening discussion with Dr Boyacioglu, the film critic and broadcaster Phillip Bergson praised The Smell of Money as “a very strong, contemporary film.” He asked Dr Boyacioglu: “Was it based on a fable, or a real incident?” to which the director replied: “Let us say it could happen any time.” A member of the audience asked why he did not turn the camera on the face of the (female) secret service boss.  He said that there was no need for such an obvious shot: “we see these faces all over, in the newspaper etc.” 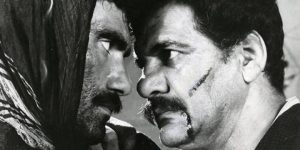 High drama in Law of the Border.

Another astute spectator noticed that in every instance in the film, the men were in awe of the women. Is that typical in Turkey? Dr Boyacioglu: “Unfortunately, Turkish men are quite wary and afraid of their mother. In Turkey, the mother organises everything. My grandfather was afraid of my grandmother!”

The most recent exhibit at the festival was the 2019 feature Turkish Ice Cream, which opened in 900 cinemas domestically after a premiere in Istanbul in March, and is being released around Europe.

Set-and largely filmed in New South Wales and mostly in English, the 123-minute Turkish’i Dondurma is based on a real story of two young Turkish men making a living in Australia selling ice-cream from a barrow. The Battle of Gallipoli becomes a critical engagement during World War I and the men are desperate to get back to their homeland. The authorities try to stop them leaving and they are up against wartime propaganda in Australia against the Turks. 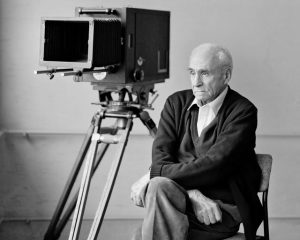 One of the most expensive European co-productions of its type, it is directed by the highly-experienced Can Ulkay, and cast members include Erkan Kolçak Köstendil, Ali Atay, Şebnem Bozoklu, Will Thorp, Carl Wharton, James Farley, Tristan Alexander and Marleen Mathews.

The Film Week closed with a screening of epic Law of the Border on April 30 in the Arthur & Paula Lucas Lecture Theatre at King’s College.

Only one copy of the film had survived the 1980 Turkish army coup d’état which resulted in more than 900 “objectionable” movies being banned, with many prints seized and destroyed. The sole copy of Law of the Border was badly scratched, had lost some frames, and suffered deterioration from being in black and white on colour stock film.

As a tribute to the director Ömer Lütfi Akad the film was restored to watchable condition in 2013 by Martin Scorsese’s World Cinema Foundation at the laboratory of Cineteca di Bologna/L’Immagine Ritrovata in association with Dadaş Films and the Turkish ministry of culture.

There are still sound fades and even cuts, but the restorers did wonders with imagery, continuity and dialogue.

Made in 1966, co-written by and starring Yılmaz Güney who went on to win the Golden Palm at the Cannes Film Festival with Yol (The Road), the story is of a remote, almost lawless rural town in south east Turkey. It is peopled by struggling merchants, sheep smugglers, cheats, a greedy landowner, a new-broom law-enforcing lieutenant and a young woman teacher striving to win support to set up the area’s first school. It was one of the first films to depict the rigours of back-country life close-up and won praise for its naturalism, opening a phase of New Cinema in Turkey.

Viewed from half a century on, it must be considered a world classic, as well as an achievement of one nation.

In a panel discussion after the London screening, with Prof Nezih Erdoğan from Şehir University, Dr Iain Robert Smith from King’s College and film critic Phillip Bergson, it was agreed that Law of the Border was reminiscent of the Orson Welles-directed chase scene though the sewers of Vienna in The Third Man. 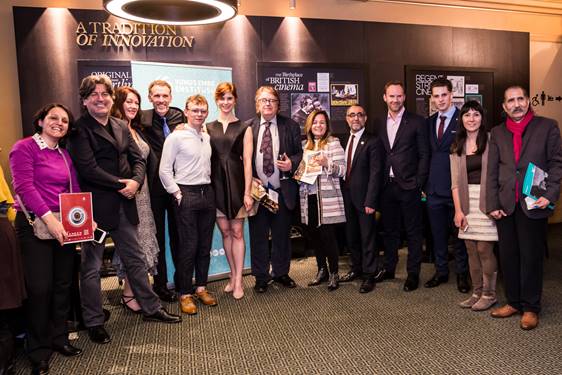 At premiere of Turkish Ice Cream.

Dr Smith said it was clear that elements of the Western cowboy genre were breaking through — certainly the director gave full play to running, gun battles at the close of the story. “A tremendous film” was the verdict of Phillip Bergson.

Another powerful film was Cicero which was shown on April 26 at the Regent Street Cinema. Directed by Serdar Akar, this is a re-telling of the exploits of one of the most famous or infamous spies of World War II. In neutral Ankara, Kosovo-born Ilyas Bazna — code name Cicero — was working as a valet to the British ambassador, and in a deadly role as possibly a double agent.

Among documentaries, Guardian of Angels (Meleklerin Koruyucusu) was shown at the Yunus Emre Institute in Maple Street, London W1. The film was shot in 2018 in English with Turkish subtitles, and Ensar Altay was director and responsible for screenplay. 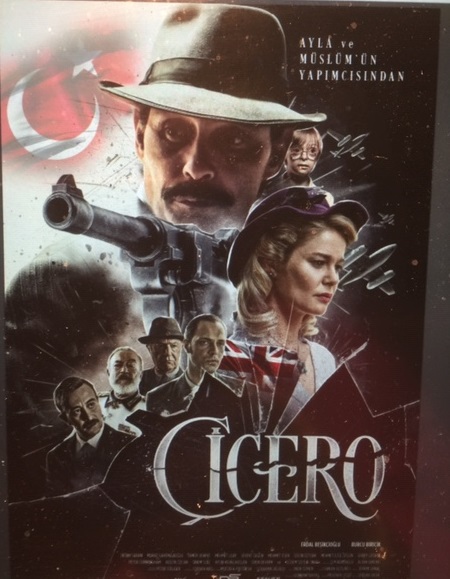 This moving 76-minute presentation is the story of Mohamed Bzeek, originally from Libya, who moved to the US in 1978 for university and married Dawn, a foster mother for terminally ill children. She passed away in 2015, and Mohamed continued to care for the girl that they adopted together, who suffers from anencephaly, a congenital condition of the skull which results in her being deaf and blind. The little girl was not expected to live beyond the age of one, and the film takes up the story ahead of her seventh birthday.

Seven short films of diverse genre were shown at King’s College on the afternoon of April 30, most by aspirants who trained under the guidance of Prof Nezih Erdoğan. The professor encourages his students to reflect their own experience in productions.

The shorts included Frequency by Ahmet Serdar Karaca, in which a breezy radio host is startled when a mystery voice phones his programme claiming that his sister has been taken hostage for ransom.

The Stranger (Yabancı) by Üsame Sekizkardeş is about a 12-year-old boy finding in a field what to him is a strange object, and the reaction of his parents.

Taha Reis by Abdullah Enes Ünal is straight documentary about a 19-year-old man following his father’s career as a fisherman since he was 13. Already he has become a skipper with his own fishing vessel.

Kar Taneleri (Snow Flakes) by Elif Nur Kayalar tells of people with albinism in Turkey and how their social relations, personal affairs, and education are affected.

A Spirit’s Flight (Can Kuşu) by Abdullah Şahin is about a cantankerous old couple in an Anatolian village. The wife cannot drink tap water, only natural spring water which her husband must carry from its source some kilometres away. She dies after the man forgets one day to bring the water, giving him remorseful nightmares.

In Waiting for The Rain (Yağmuru Beklerken) by Burhan Hatinoğlu and Selma Şirin, we see a teacher who marks examination papers and who is caring for his demented father. The teacher is blessed with remarkable kindness even when his father interferes with his work.

12 Hours (12 Saat) by Ercan Selim Öngöz is a tale of a lonely old man who, out-of-body, meets his death before he dies.

Yunus Emre Institute, founded in 2007, is named after the 14th-century poet Yunus Emre and seeks to promote Turkish culture via some 58 centres in 48 countries.

Sustainability Kick Start for Euros and Live Broadcast from Kiel