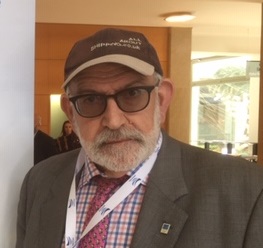 The BDI (Baltic Dry Index) gained 34 points – now standing at 974, and looks likely that same might go over and above the 1,000 point threshold – the psychological four-digit barrier. Geopolitics continue to be messy and as we have warned: expect imminent warring developments. John Faraclas’ daily recap:

The Capes’ BCI “returned” to its three digit euphoria gaining 111 points and going over the 1,200 points threshold at 1,270! Caution though as we are not just used with this volatility, we might see the combination of other factors creating once again havoc…

The other main indices remained with minor changes, thank Posidon, with plus results; the Panamaxes’ BPI clinched five points and now stands at 1,193, the Supras’ BSI “advanced” with six points at 776 and the Handies’ BHSI for nearly a week remains at 382 points!

So all in all a positive so to speak day in the Dry sector but, repeat but, we urge you to be cautious. One size DOESN’T create or make a market whether going up or down and with the trade war enfolding things might get sour…

The Wets were on a plus mode; the last published BDTI (Dirties) and BCTI (Cleans) stood at 672 – plus ten and 523 – plus nine points respectively!

The WTI lost .42 cents and now stands at US$61.70… Still CAUTION is the most appropriate word to say… as a jeopardy in Geopolitics might turn things upside down…

In the Geopolitical front we had too many issues emanating from all the problems we report:

MIGRANTS: from court cases to loss of lives to rescues by the Coast Guards in the entire Med and political chaos coupled with diplomatic inability to solve this issue. At best, once again, we say: SHAME!

The USA mobilises its forces warning Iran and others that Zero Tolerance is the name of the game in case the super power’s interests are harmed in any way – same applies to the USA’s allies in the wider Middle East region – a radius of two thousand miles; at least!

Turkey bullies its neighbours in the most unprecedented way and all Organisations and Unions should saw zero tolerance to Turkish provocations jeopardising International Law. In the Aegean and East Med Turkey has aspirations despite existing treaties and alliances; using religion and blackmail as a weapon might backfire soon… The way its president acts will soon make it a mess for all in the region, even for Turkey’s “allies”… We still advise all to be cautious in the Balkans…

The European Union remains an enigma, a perplexed one given that if BREXIT happens – BREXIT of any kind, others might follow suit… and get the advantageous Customs Union status only…

Now tell me: what do you make of the seizure by the USA of the “Wise Honest”, a North Korean bulker in Indonesia?  Watch this space as well as the continuation of North Korea’s missile tests – no matter their range…

In Venezuela expect soon an “explosion” as the situation is much tensed. It might affect a wider range and many counties might get caught up in an inferno… Maduro MUST go! “Nearby” in Argentina things are also tensed…

On another tone and note we had four events …in the plain of Athens so to speak: 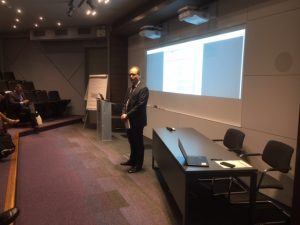 The first one, a two day event was held at the ALBA university premises in the heart of Athens; “Disruption – Decarbonisation-Date: IMSF 20119 – Athens”. Congrats to Chris Palsson – from Lloyd’s List Intelligence Consulting and Spyros Vougious – Director of the MBA in Shipping and the MSc in Shipping Management programs and Co-Director of the MSc in International Shipping and Finance program at ALBA for running this event and bringing over to Greece these excellent speakers and audience  / real stakeholders from all over Planet Ocean; an event were the audience was 60 centum international!!! That’s what I call a success given also the excellent Q&A time turned into a debate! We were tipped-off by Captain Nick Pentheroudakis and we owe him a favour. 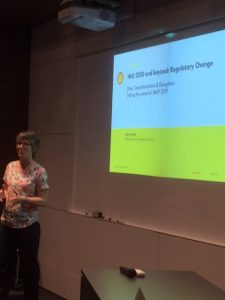 Claire Wright from Shell was the first speaker on “IMO2020 Update: how the shipping industry is moving towards compliance”. Very well construed paper with six questions “aired” warming up the audience! Then come Rid Mathewson from Gibsons replacing IHS’s Fotis Katsoulas who couldn’t make it  and talk on “Tanker Market update”.  Latsco’s Mariniki Psifia’s presentation on the “LPG’s Market Update” was well received by the audience- excellent slides too!

After the coffee break we heard Niklas Bengtsson from Lloyd’s List Intelligence speaking on “Container market development and the potential for further containerisation” – interesting slides Zubair Adam from Richardson Lawrie Associates in the UK on the  “Chemical Tanker Market” and Vasilios Ghikas from Bureau Veritas with a well prepared “Dry Bulk update”. 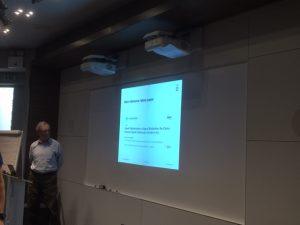 The buffet lunch turned to a networking place inside and outside the building and its tavern-style porch!

Session two had very interesting presenters: First come Dr. Patrick Beullens from the University of Southampton. His paper was on “Why ship travel at different speeds – it’s not just about numbers”. Well done for a difficult issue. Prof. Harilaos Psaraftis’ paper was very intriguing; sort and to the point on “Speed optimization vs speed reduction; the speed limits lobby strikes again”.

The last speaker during my presence there was Carmello Cartalemi from Winterthur Gas&Diesel; and what a presentation that was! “X-DF low speed engines and LNG as fuel starts the transition to carbon-free fuel for the merchant marine industry”.

Will revert with more on the above event soon… but interestingly the day ended at the Akroyiali fish restaurant with the iconic view of Cape Sounion and its Temple of Posidon! 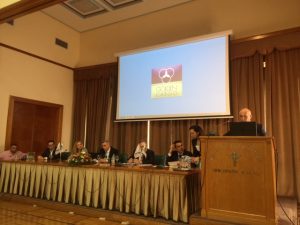 Well done for GOLDEN CARGO, the up and coming Maritime Logistics company and beyond at a full house in Piraeus’ Chamber of Commerce and Industry!

Indeed a company of Creative Solutions and this excellent forum / workshop must be repeated in other Greek Port-Cities and abroad too were the company opens offices to better serve the international shipping community. 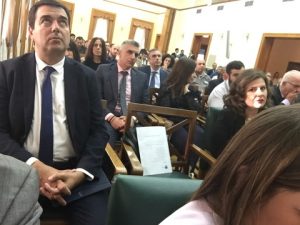 A view from the audience

The subjects covered included the custom’s regime in Greece with respect the movement of spares to and from Greece; the strategic alliance and cooperation between Golden Cargo and LH Cargo; the digital platform and cooperation with Marine Traffic as well as the cooperation and progress/development of Golden Cargos’ offices in Cyprus, Singapore and Panama. 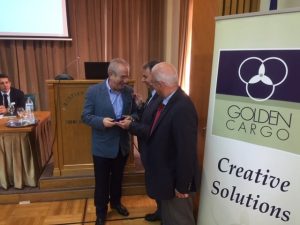 Above all, it was good to witness the great collaboration between Golden Cargo with Lufthansa – LH Cargo and Marine Traffic.

There were also some position statements from the audience and a Thank-you note by the Chambers’ president Vassilis Korkides who also gave a commemorate plaque to Michael El. Veniamis reflecting the company’s support and trust for Piraeus and its Chamber!

A traditional style reception followed with drinks and greek dips deeps as well as with cold and hot plates and networking. Good to see many friends and supporters of allaboutshipping as well as relatives and Chiot compatriots! Vrontados Rules the Waves and …Airwaves too. You can imagine how we felt with Anny Zade during our visit to Panama late last March with the presence/existence the Golden Cargo’s office there!!!Excellent! 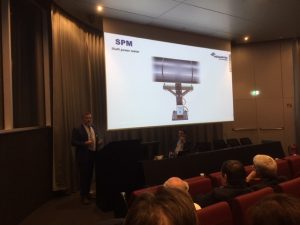 The first one was presented by Dr. Christos Chryssakis of DNV GL in Oslo and the second one by Martin Hees from Aquametro Oil  & Marine AG.

Interesting questions followed and it was good to see the young generation / university students asking same;  “What is the negative environmental impact of scrubbers – as you have mentioned it is being discussed during the previous months by the international maritime community?” was Mirsini Papaioannou’s question which was excellently replied by Dr. Chryssakis with the open loops systems. An event well presented by its chairman John Kokarakis with Harry Petrakakos’ (SNAME’s Secretary/ Treasurer) intruding but well construed questions. Many Congratulations to Ms Sofia Iliogrammenou for her organisational skills and the hosts for their eco venue and reception which followed – an in depth networking for a very important and timewise urging issue.

@John Faraclas. You wrote:The last speaker during my presence there was Carmello Cartalemi from Winterthur Gas&Diesel; and what a presentation that was! “X-DF low speed engines and LNG as fuel stats the transition to carbon-free fuel for the merchant marine industry”
I say: “Carbon is in LNG as well”
If we want De Carbonization we must go Solar, Sails, Nuclear. That’s it. Holistic approach in all other fuels return us back to starting point.