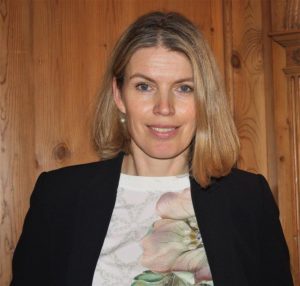 Claudia Tornquist heads a minerals exploration company with a diamond resource that could eventually yield sparkling results, but for now the business is switching the focus to drilling for one of the most basic of base metals: copper.

This is because copper has become an impressive performer in the commodity markets, thanks to its take-up for many of the new ‘green’ technologies.

Ms Tornquist is chief executive and president of TSXV-listed Dunnedin Ventures, which began as a pure diamond-exploration company, but has transformed its portfolio by adding assets where the target is copper. The company has begun prioritising its 100%-owned copper porphyry projects in British Columbia and Arizona over its Kahuna diamond project in the Canadian Arctic territory of Nunavut.

“It does not mean we have given up on the diamond project: we shall be ready for that when the market tells us,” said Ms Tornquist who has just completed a series of presentations to investors and brokers in London, Zurich, Geneva, Munich, Frankfurt, New York and Los Angeles.

She said that the undersupplied copper market was seeing rising demand as a result of electric vehicles and solar projects – and almost everything else with a ‘green’ impetus. Among other factors, China’s power and infrastructure sectors were surging ahead of supply growth.

“The copper deficit won’t go away for the next four or five years,” she predicted, citing research by Fitch Solutions. “Our shareholders are more interested in the copper possibilities than the diamonds.” 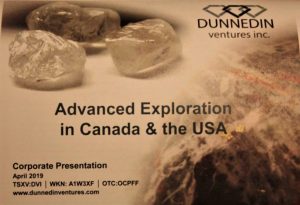 Dunnedin started its acquisition activity by purchasing the MPD project in south-central British Columbia to add to its existing Trapper porphyry project in the mineral-endowed Golden Triangle region in the north-western portion of the same province near Princeton. The Trapper and MPD Projects are interpreted to overlie gold-rich copper porphyry systems, with sizeable surface geochemical, geophysical and regional alteration signatures.

Adding to these prospects, in March 2019 Dunnedin signed a letter of intent to acquire the Mohave copper-molybdenum-silver porphyry project in Yavapai County, Arizona. “Arizona is copper country. There are lots of very big copper mines in the state,” said Ms Tornquist.

The company on April 29, 2019 announced the closing of a non-brokered private placement for gross proceeds of just under C$1.5m. This has helped Dunnedin build its treasury to C$2m to carry out its copper porphyry exploration plans.

With the three copper assets, Dunnedin will be able to drill year-round. Ms Tornquist said: “Dunnedin’s team is looking forward to kicking off a busy exploration season on several fronts, and we are now fully funded for this work.” This will start “within weeks” with exploration at the formerly drilled and recently consolidated MPD, “which we are confident presents an excellent opportunity for discovery.”

The MPD project is near some of the largest copper-producing mines in Canada. Nestled between the Teck Highland Valley and the Copper Mountain Corp mines, MPD is easily accessed and looks cheap to explore. Dunnedin has successfully completed community consultations and should be “on the ground” during June.

The company plans six drill holes at MPD which could reach up to 1,000 m depth. “This is getting our geologists really excited,” said Ms Tornquist. Drilling by a previous owner – a company that no longer exists – ceased in 2012 when “the market fell off a cliff.”

The company will carry out sampling on the Trapper land package (which totals 38 sq km) in July.

It plans to drill in autumn at Mohave, which could host a large-scale copper porphyry deposit with silver and molybdenum credits. Its geology is considered analogous to New York-listed Freeport McMoran’s Bagdad copper porphyry mine 33 km to the east of Mohave. 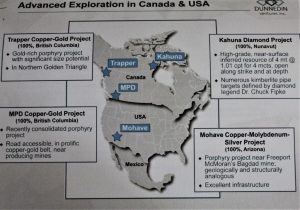 “Mohave enhances Dunnedin’s copper portfolio with a US-based asset located in a prolific copper mining district,” said Ms Tornquist. “Investor sentiment in the US favours domestic resource production, so developing this copper project at Mohave is anticipated to have strong appeal.  Mohave is an underexplored property with nearby producing mines and excellent infrastructure.  Mohave is a 4 sq km land package, near Highway 93 which links Las Vegas and Phoenix. Geological, geochemical and geophysical surveys indicate that Mohave is part of an extensive sulphide-bearing hydrothermal system.”

Two small-scale mines operated on the Mohave property in the 1950s and 1960s: one for copper oxide and one for molybdenum-lead-silver.  In the late 1960s and early 1970s explorers identified copper-molybdenum-silver porphyry mineralisation in several shallow holes, and in 2011 eleven wide-spaced core holes totalling 3,500 m were drilled.

The consideration for Mohave was C$50,000 in cash and C$100,000 in Dunnedin shares, plus further shares as compliant resources are identified and studies progress.

Dunnedin holds diamond interests in 1,664 sq km of mineral tenure 26 km from Rankin Inlet, near Agnico Eagle’s Meliadine gold mine and near deep-water shipping access on Hudson Bay. The advanced-stage Kahuna project hosts a high-grade, near-surface inferred diamond resource and numerous kimberlite pipe targets.  The company is working with its advisor and largest shareholder (at around 10%) Dr Charles (Chuck) Fipke, who discovered Canada’s first diamond mine at Ekati, Northwest Territories. Dunnedin says that his “vision and scientific insight was instrumental in the emergence of the Canadian diamond industry.”

Despite the attractions of its Arctic property, Dunnedin is cautious about investor interest in diamonds: “We have looked at the  market and decided it is not going in the right direction,” said Ms Tornquist.” The company must bear in mind its modest market capitalisation of C$9m, when it would have to spend $2-4m on its diamond exploration.

Global natural diamond production peaked in 2017 and is forecast to decrease for several years; several large mines have closed and only one sizeable new mine is under development, in Angola. There is some impetus in consumer demand, which is expected to rise 3.5% in 2019, driven by economic growth in the key markets US, China and India.

Based in Vancouver, Dunnedin is part of the Discovery Group of companies led by John Robins, one of Canada’s most successful mining entrepreneurs. Discovery Group members include Bluestone Resources, Fireweed Zinc, Great Bear Resources and Genesis Metals. Group merger and acquisitions successes include the sale of Kaminak Gold to Goldcorp for $520m in 2016 and Northern Empire Resources acquired for $117m in 2018 by Coeur Mining.

One of the few women executives in the mining exploration sector, Claudia Tornquist has a financial and commercial background in the base metals and diamond sectors. She was formerly a general manager at Rio Tinto working with its copper group and its diamond operations in Canada and Australia. At Kennady Diamonds, she led the board’s $176m sale of the company to Mountain Province.

One independent broker commented: “Dunnedin has picked up two good quality projects at around one-third of the price that might have been expected, because there are people [other players] who are desperate. You have got to commend the board in being realistic in doing this and changing direction. But they have lost nothing in the diamonds. I have a high opinion of Claudia, and there are not enough like her in this industry where not everyone can handle exploration projects.”