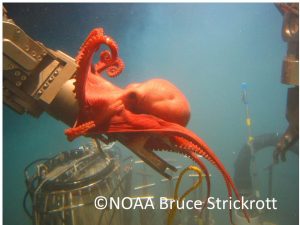 Seas At Risk and the Deep Sea Conservation Coalition (DSCC) welcome the call for a moratorium on deep-sea mining in international waters by the Long Distance Fleet Advisory Council (LDAC) of the European Union. In calling for a moratorium, the LDAC highlighted concerns by scientists, the fishing industry and environmental organisations over the potentially severe impacts on fisheries, fish and other species in the oceans and inevitable loss of marine biodiversity from deep-sea mining. The Executive Committee of the LDAC adopted the advice to the European Commission and EU Member States at its meeting in Poland last week and publicly released it today.

The International Seabed Authority, an intergovernmental organisation established under the UN Convention on the Law of the Sea, is in the process of developing regulations that would permit mining the international areas of the deep ocean seabed.

Matthew Gianni, co-founder of the Deep Sea Conservation Coalition, said “Fishing industry representatives and NGOs in Europe are jointly raising concern with EU member states and the international community over the prospect of deep-sea mining and its likely impacts on fisheries and the marine environment. Scientists have warned that biodiversity loss will be inevitable and likely permanent on human timescales if the International Seabed Authority begins issuing licenses to mine the deep ocean seabed for metals such as copper, nickel, cobalt and manganese.”

The LDAC recommended that no deep seabed mining in the international areas of the ocean seabed under the jurisdiction of the International Seabed Authority should be permitted until:

The LDAC further called on the European Commission and Member States to stop funding, facilitating or promoting the development of deep-sea mining and deep-sea mining technology.

Ann Dom, Deputy Director of Seas At Risk, said “We count on the EU Member States to take to heart the call for a moratorium by the European Parliament and the fisheries sector, and to put it firmly on the agenda of the upcoming annual session of the International Seabed Authority”.

The LDAC endorsed a European Parliament resolution adopted in 2018 which also called for a moratorium on deep-sea mining and reform of the International Seabed Authority (ISA). In January of this year, echoing similar concerns, the UK House of Commons Environment Audit Committee released a report stating that deep-sea mining would have “catastrophic impacts on the seafloor” and that the ISA stands to benefit from revenues from issuing mining licenses which the Committee viewed as “a clear conflict of interest”.

John Tanzer, Leader, Oceans Practice, WWF International, said: “A moratorium on seabed mining – given its inherent risks and how little is known about life on the sea floor – is just plain common sense, and particularly in light of recent global biodiversity assessments showing the planet is suffering unprecedented species loss that will have profound impacts on nature and humanity at large”.

The Long Distance Fleet Advisory Council (LDAC) is an EU fisheries body representing stakeholders of both the fishing sector (including catching, processing and marketing sectors, and trade unions), and other groups of interest (environmental NGOs, consumers and civil society). Several DSCC member organisations, including Seas At Risk, WWF, Oceana, Bloom Association, are members of the LDAC.