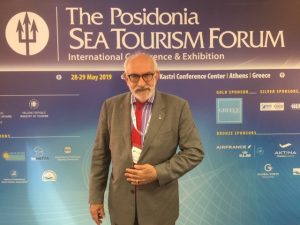 The BDI (Baltic Dry Index) gained 25 points thanks to another “surge” by the Capes; the Geopolitics not just perplexed, it’s more than in a mess. John Faraclas’ brief market recap:

Still losses for the Supras’ BSI now at 763 – minus eight points… CAUTION!

The Wets still with mixed feelings; the last published BDTI (Dirties) and BCTI (Cleans) stood at 658 –  minus seven and 539 –  plus 12 points respectively.

An interesting report by VesselsValue follows:

Migrants still the top and most important issue with many rescued but also many lost in the Med… the good weather “creates” the perfect environment for further surge in Migrants crossings in the entire Med area. At the other side of the Atlantic at the USA – Mexican border the Trump administration will do everything to stop the movement of Migrants, even with what is left: tariffs; what’s this space..

Watch the faulty line from Gib to Afghanistan and from the Caucuses to the Horn of Africa with the four focal points North Africa, Iberian Peninsula – Catalonia,  The entire Balkans – not just West Balkans where despite “progress” with Albania (NATO member and possible EU entrant) the greater Albania prospect might shake the region upside down…. CAUTION, add the North Macedonia anecdotal situation (NATO prospects as well as EU future entrant) and see what you get given also that Turkey and Russia stir up the region); The Eastern Med and the entire Middle East…  Did I hear you say another Cyprus melee… Add the Iranian issue and see what you get… Ultra CAUTION should be observed… 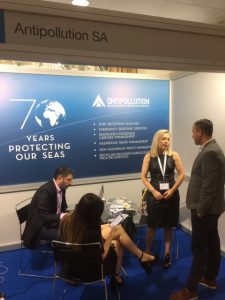 The Antipollution stand at the exhibition hall of PSTF

With seven more sessions and respective panels plus the YES to Sea Tourism Forum the Conference and Exhibition will remain in history as one of the ever best given some special encounters on Q&A times as well as a couple of inter-panel ones!

Destinations, Itinerary Planning & Shore excursions the first of the morning two in parallel sessions was unique. The parallel workshop took place at the Pythagoras 106-7 seminar room and was titled: HEMEXPO: A dynamic entry into the Cruising of the Marine Equipment Manufacturers… 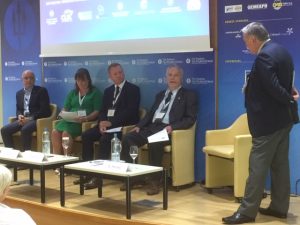 After an extended coffee break the Year Round Cruising panel took place which contemplated on a 365-day approach to cruising! What an excellent moderator Grant Holmes was given the difficulties surrounding the East Med region. Panellists included Emad Hassan, an advisor from the Egyptian Ministry of Tourism; Theodore Kontes, president of the Union of Cruise Ship Owns and Associated Members ; Leslie Peden, CCO from Celestyal Cruises and Claire Levitt, deputy destination experience manager from Fred Olsen Lines. 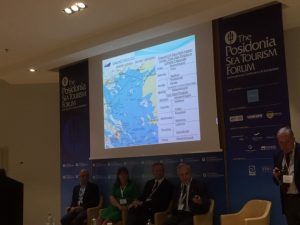 Theodore Kontes, standing on the right delivering his slides presentation

On all counts Kontes’ slides presentation was one of his ever best – well construed, simple and very explanatory; excellent! We did put forward some points warming up the debate during Q&A time… good to see Kavala in the charts… need more infrastructure and Chios too but we all await the airport to make up the difference; it’s about time as any further delay works against this eastern Aegean Greek Islands development and well-being of its people, needless to say that tourists and Cruise operators are losing from a great destination!

After an excellent working lunch the much awaited Yachting & Marinas “The Challenges Remain” panel took place with the best challenging debate so far witnessed in a conference in Greece! 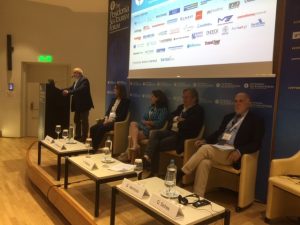 Oscar Siches an ISO Yacht Harbour Expert, and Marina Consultant, Member of ICOMIA from Mallorca in Spain had a difficult job to do given the inter-panel exchanges as well as those from the audience with all four panellists. We also contributed on the legal framework and procedures front… 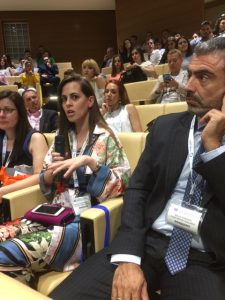 The Room was …on “flames” with the debate exceeding the time allocated and the organisers urged Oscar Sishes to end the debate; strong points come from the very eloquent Maria Ntouka-Montesantou, the legal advisor of A1, and Stavros Katsikaris head of the Marina of Flisvos in Paleon Faliron and  president of the Union of Greek Marinas.

Once again we delivered a few statements from our experiences all these years in London on the things missing in promoting yachting and maritime tourism in Greece. 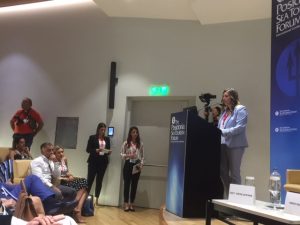 The Final panel was also more or less an event of its own; the YES to Shipping we witnessed in the past appeared with its YES to Sea Tourism Forum team and … speciality so to speak! This leading platform on the open dialogue in the Greek Shipping and Sea Tourism Industries comes at no better time – both for the event as well as for the industry given the situation people live in Greece vis-à-vis jobs and we have to warmly congratulate the Danae Bezantakou and her team of followers for the initiative, impact and results it already creates – same were more than appropriately demonstrated on stage!

After a short but to the point vigorous speech delivered by Danae Bezantakou, George Alexandratos took the podium with an excellent speech / call too calling for action from both sides of the equation; a real wake up and join in this sector of business!. 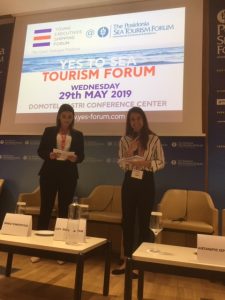 Vassiliki  and Eva come on stage, two of the new followers; what a way forward!

The opening address was given by Dr. Panagiota Dionysopoulou, general manager of tourist policy at the respective Greek Ministry of Tourism…. She was followed by Dora Yiannaki, a specialist scientist from the General Secretariat of Youth in Greece.

Theodore Kontes had his day; he also delivered an interesting slides presentation with some excellent  statistics for the entire industry; BRAVO! I guess from this well construed presentation many more will follow this sector of the shipping industry. 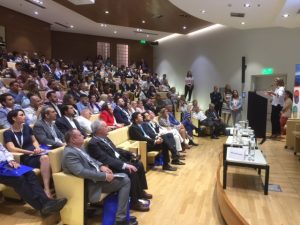 An old friend from the past and staunch supporter of the YES to Shipping, Xenia Kourtoglou took the podium.

What do the companies ask for? What do the newcomers wish and expect! 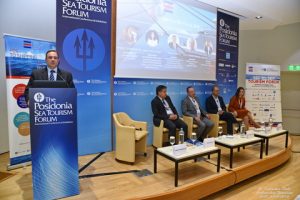 As other running issues where of essence too, had to leave but heard that this panel did more than well with self-made people such as one of the speakers, Paris Dragnis, Dr. Thanos Pallis and others. Good to have there journalist Minas Tsamopoulos from Proto Thema moderating this excellent panel! Congrats to all involved. Ah! And the room was once again bursting to its sims by the dozens of youngsters attending. 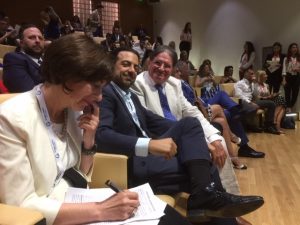 Lastly it was great witnessing the happy face of captain Dimitris Bezantakos attending the event and being more than pleased and content from his daughters success; a very touching moment; the smile in the photo we took depicts everything!

That’s all for tonight, have a nice evening and remain on guard from actions emanating from Pirates, Terrorists, Criminals and Business Hooligans whatsoever wherever you are on Planet Ocean!