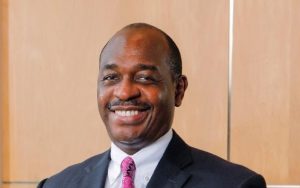 Cox, a Bermudian who began his career as an auditor and later served as the Bermuda government’s Registrar of Companies, joined the BMA in 2002. Named Chief Executive Officer in 2010 and Executive Chair this January, he has led the authority through market milestones, most notably, its 2016 achievement of full equivalence with Europe’s Solvency II insurance regulatory regime. The BMA marks its 50th anniversary this year.

“Jeremy is a key figure in the Bermuda market for his leadership of the BMA during a period when it has won global recognition and respect,” said Conference Chair Mike Parrish. “His contributions to both the island’s insurance industry and other financial services sectors have demonstrated a commitment and vision that not only helped the BMA become globally recognised, but, as a result, also strengthened the jurisdiction’s economic future.”

The award, launched in 2016, is named in honour of Reiss, a pioneering Ohio engineer who conceived of the idea of “self-insurance,” by which corporations could manage their own risks through a dedicated subsidiary. Starting with American steel companies, Reiss pursued the concept in Bermuda, launching the first captive in 1962. The sector recorded exponential growth over the next five decades, distinguishing Bermuda as the world captive leader and fueling the foundation of the island’s entire insurance industry.

The conference launched the award to celebrate the collaboration of outstanding captive insurance industry professionals. Previous winners include Jill Husbands, former chairman and managing director of Marsh IAS Management Services (Bermuda); leading corporate lawyer Michael Burns; and Brian Hall, an insurance industry icon and former director and president of Johnson & Higgins. Cox receives this year’s award at the official opening of the conference on the morning of Tuesday, June 11, at the Fairmont Southampton.

“I am deeply touched and honoured to receive the Fred Reiss Lifetime Achievement Award and to be part of such a group of talented recipients,” said Cox, who will also be the industry keynote speaker at this year’s conference on Wednesday, June 12. “I must acknowledge my BMA colleagues for their support and teamwork, and the responsible captive market participants who have never shied away from engaging in constructive dialogue with their regulator. This type of engagement has become a differentiating feature of the Bermuda regulatory experience and will continue to serve Bermuda well as we look to remain the premier domicile for captive insurance.”

Cox has responsibility for all supervisory activities conducted by the BMA, including oversight of banks, trust companies, investment businesses, insurance companies, and the Board of Directors. A graduate of Northeastern University, Boston, Cox earned a BSc degree in Finance and Insurance cum laude in 1989. He first worked as an auditor at Arthur Andersen & Co in Bermuda, before joining the Registrar of Companies, where he served as technical officer in the insurance division, and later inspector of companies, and finally Registrar. In this role, his responsibilities included providing technical support to the Minister of Finance on all insurance-related matters. After joining the BMA in 2002, Cox served as executive director and supervisor of insurance, becoming deputy CEO in 2008, and CEO in 2010 until taking up the role of Executive Chair this year.

This year’s 15th Bermuda Captive Conference is expected to attract close to 800 delegates, including captive insurance owners, risk managers, captive managers, sponsors, and vendors from the United States, Canada, Latin America, and the United Kingdom. Under 2019’s theme of “Elevate,” the event comprises three days of moderated panels and roundtables focusing on hot topics like insurtech, cyber-risk, climate change and healthcare, as well as new and emerging risks for which captives provide cost-effective solutions.

Last year’s Bermuda Captive Conference was hailed an impressive showcase of diversity and innovation by delegates. Notably, it attracted more captive owners and risk managers than ever before in the event’s history. More than 800 attendees registered from the United States, Canada, Latin America, and the United Kingdom, as well as Bermuda, driving total hotel room nights close to 1,000.