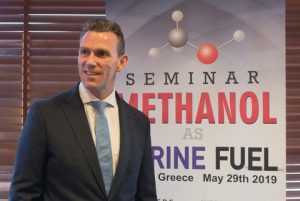 Low emission methanol is simple to adopt and straightforward to implement, offering compliance with IMO 2020 and a pathway to meeting 2030 and 2050 CO2 emission targets

Athens, June 17 2019. Leading figures from the Greek shipping market gathered in Athens, Greece for the third in a series of global seminars designed to educate the industry on the potential of methanol as a marine fuel.

The seminar held in late May, organised by consultancy Sea Commerce and supported by the Methanol Institute, Methanex and FEDCOM, brought together more than 70 delegates to hear from stakeholders leading in the use of Methanol as a marine fuel, including Waterfront Shipping Company, Marinvest Shipping, The Methanol Institute and MAN Energy Solutions.

The speakers discussed the use of Methanol as fuel from the point of view of ship design and construction, management and operations, propulsion and regulatory issues, drawing on direct experience and expert insight. 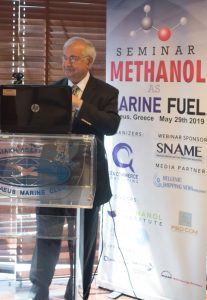 Saleem Alavi: Methanol is similar to existing liquid marine fuels and is much easier to handle than LNG, as existing fuel tanks can be used, while the cost of conversion to Methanol is 25% of an LNG conversion.

Seminar series organiser Capt Saleem Alavi, President of Sea Commerce, reinforced the advantages compared to LNG, which is being heavily marketed as a long term solution.

“Methanol is similar to existing liquid marine fuels and is much easier to handle than LNG, as existing fuel tanks can be used, while the cost of conversion to Methanol is 25% of an LNG conversion. Beyond cost savings, Methanol is the only 2020-compliant fuel capable of intrinsically achieving NOx Tier III compliance by use of water in fuel technology. In the near term, bio-methanol has near zero CO2 footprint, hence it is capable of addressing the forthcoming IMO CO2 reduction regulations.”

Paul Hexter, President of Waterfront Shipping, a wholly owned subsidiary of Methanex, explained that Methanol could be cost-competitive and delivered value beyond a simple bunker cost equivalent.

“On an energy equivalent basis, Methanol is cost competitive over the cycle compared to conventional low sulphur fuels such as MGO. Going forward, we see significant value creation opportunities of a methanol flex fuel engine, with efficiency gains mitigating expected increases in the price of conventional ultra-low sulphur fuels and the potential to eliminate selective catalytic reduction. These benefits make methanol a viable clean fuel option for the marine industry and part of the solution to help meet future emissions regulations.”

Peter Hinchliffe, Consultant to the Methanol Institute provided a perspective on the development of regulations governing the use of Methanol, in the revision of the IGF Code by IMO.

“We are in a confidence-building stage at the moment where we can see a clear trajectory through sulphur regulations to the IMO strategy on GHG reduction and shipowners need to see this as a continuum; a knee jerk reaction to first sulphur and then to CO2 reduction will not be cost-effective. Methanol provides a solution that addresses both regulations and over time should be both a cost-effective and long term solution.”
Fredrik Stubner, Director Ship Management Marinvest Shipping, shared real life operational experience running tankers powered by Methanol on behalf of Waterfront Shipping.

“Our first four ships delivered in 2016, have not experienced any serious issues that have resulted in off-hire or idle time and we now have in excess of 45,000 successful running hours on Methanol. What should be realised is that the EEDI reduction introduced in 2030 will apply for new ships as well as old. We expect that carbon emissions will be measured from well to wake, so Methanol which can be produced from many different sources will have big advantages.”

“Our LGIM Methanol engine not only lowers SOx and CO2 emissions, our latest tests show that mixed with water, Methanol can meet Tier III NOx emissions without any additional SCR equipment. Installation is simple as a Methanol fuel gas supply system operates at low-pressure and fuel is stored without the need for cryogenics. Engines can be retrofitted easily with very few components, thereby increasing the value of the vessel.”

The seminar was live streamed and sponsored by the Society of Naval Architects and Marine Engineers (SNAME) which will make a recording available via its website.

Feedback from delegates suggested that the industry still requires additional data and practical information on the use of Methanol as marine fuel and on its potential as a sustainable fuel when produced from renewable sources. Basil Galanomatis, Manager, Newbuilding Contracting, George Moundreas & Company SA said:

“Methanol seems to be one of the most attractive solutions for use as marine fuel provided the issues of availability and production cost are resolved. The method of Methanol production by capturing atmospheric CO2 seems to be very promising in respect to a dramatic reduction in GHG emissions.”

The next seminar in the series will be held in Sao Paolo, Brazil in August (date to be finalised). To register and for more information please contact: info@seacommerce.co

The Oslo Stock Exchange imposes a violation charge on Lavo.tv AS