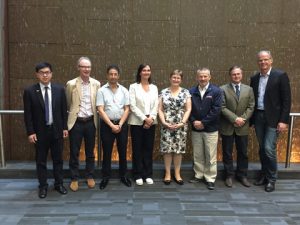 The new board with Theresa Crossley, CEO of the IMRF fifth from the left.

IMRF members elected their new Board of Trustees yesterday (18 June) at their Quadrennial General Meeting (QGM) in Vancouver. The meeting followed on from the 4th World Maritime Rescue Congress, which brought together maritime search and rescue specialists and equipment providers from around the globe  The new Trustees, who will serve a four year term, then held an initial meeting to elect a new Board Chair. The newly elected Trustees are:

At the same meeting, members also showed their appreciation for outgoing IMRF Chairman Captain Udo Helge Fox, whose term of office came to an end after more than 12 years of involvement with the organisation. Captain Fox first joined the Board of Trustees in 2007 and has been its Chairman since the last Quadrennial General Meeting in Bremerhaven in 2015.

Udo is a Master Mariner and has been Executive Director of the German Maritime SAR Service (DGzRS) since 2001.  Before that, he was Head of the Maritime Rescue Coordination Centre in Bremen. He has also been a visiting lecturer at the World Maritime University in Malmo, Sweden and has personally made a huge contribution to improving maritime SAR around the globe, working on behalf of the German Government, the IMRF, the International Maritime Organization (IMO) and the European Union.  Earlier this year, Udo was awarded the Order of Merit of the Federal Republic of Germany in recognition of his work.

Theresa Crossley, CEO of the IMRF, said: “Udo is passionate about maritime SAR and he has been tireless in his efforts to improve global SAR capability and prevent loss of life.  He has also been an tireless advocate, not only raising awareness of the importance of having an effective maritime SAR service, but also recognising those who risk their own lives to save others in SAR operations.  Although we will miss Udo’s wise counsel at the IMRF Board meetings, he will always be part of the wider IMRF family – his many friends around the world will make sure of that.”