BIMCO: Crude oil tanker freight rates from the Arabian Gulf to China doubles on the back of tanker attacks 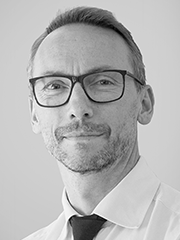 VLCC spot freight rates between the Arabian Gulf and China rose 101% in the days between 13 June 2019 and 20 June 2019, in the aftermath of attacks on two tankers in the Strait of Hormuz. Spot freight rates for a VLCC, carrying 2 million barrels of oil, between the Arabian Gulf and China reached USD 25,994 per day on 20 June, their highest level since March and significantly above the May average of USD 9,979 per day.

Despite this increase, freight rates on this route only narrowly exceeds the daily break-even costs of a VLCC, that on average amounts to USD 25,000 per day.

The latest attacks which happened on 13 June 2019 have further increased uncertainty which was already high following explosions on four tanker vessels off the coast of the United Arab Emirates on 12 May 2019. 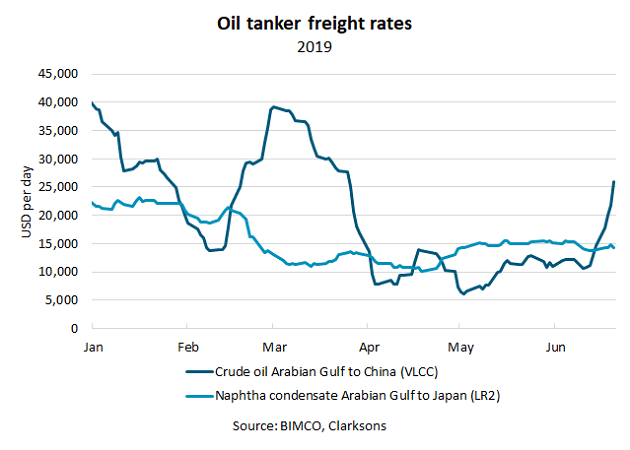 Measured against global oil demand, around a fifth of global oil consumption sails through the Strait of Hormuz, making the strait a critical chokepoint for global energy markets. Considering only seaborne transportation of crude oil, the 19.7 million barrels per day transiting the Strait of Hormuz represents 49% of the 40.5 million barrels transported in total (source: Clarksons Research).

Freight rates on one of the attacked routes remain stable

Although spot freight rates for crude oil tankers out of the Arabian Gulf have risen sharply, those for LR2 tankers carrying clean oil products like naphtha, have remained much more stable. Spot freight rates for an LR2 carrying ½ million barrels of naphtha condensate from the Middle East Gulf to Japan, rose by only 4% between 13 and 20 June 2019. The ‘Front Altair’ was sailing on this trade when it was attacked on 13 June.

Freight rates for an LR2 were down in the week of the attacks from the previous week, in stark contrast to the development in crude oil tanker earnings.

“The unchanged rates for oil product tankers compared with the jump in freight rates for crude oil tankers, illustrate the differences between the two markets as well as the effects of sentiment on crude oil freight rates,”says BIMCO’s Chief Shipping Analyst, Peter Sand.

Immediately after the attacks, safety concerns led several tanker owners to question whether they would continue trading in the Arabian Gulf, there has however been no major exodus from the market.

“The vast majority of tanker owners are more or less going about with business as usual, although they have ratcheted up their safety and security precautions when trading their ships in the Arabian Gulf,” Sand says.

These additional measures include speeding up while sailing through the Strait of Hormuz, as well as avoiding sailing through it at night at which point watchkeeping becomes more difficult.

The added costs of safety measures as well as higher insurance premiums, which rose sharply following the news of the attacks mean that ship owners will not only face higher risks but also higher costs when trading in the region.

“To avoid major disruption, it is vital for global energy trade that the Strait of Hormuz remains accessible and safe for ships to sail through. As long as tensions aren’t escalated the attacks are unlikely to have a more profound effect. However, the risks that the conflict will escalate remains very present and a great worry to everyone involved with oil trading in the region,” says Sand.

BIMCO has urged all nations to do what they can to de-escalate the situation and allow ships to pass safely through the Strait of Hormuz.