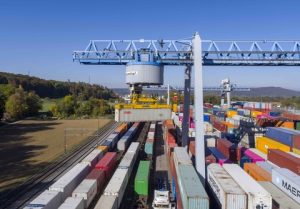 Schweizerzug launches new direct rail service to Rotterdam
Frenkendorf, Switzerland, 4 July 2019: Schweizerzug AG has continued its rapid network and service expansion with the start of a new direct rail link to the port of Rotterdam in June 2019.  The Swiss rail freight operator introduced two weekly, direct roundtrips linking Frenkendorf (near Basel) and Niederglatt (near Zurich), respectively.
With the new service, Schweizerzug connects the Swissterminal-operated facilities in Frenkendorf and Niederglatt directly with Maasvlakte II in Europe’s largest container port. The service calls at APM Terminals and Rotterdam World Gateway (RTM). The new connections present a fast and efficient addition to Schweizerzug’s Rotterdam connections via the German hub Neuss and the links to the ports of Antwerp and Zeebrugge.
According to Roman Mayer, CEO Schweizerzug AG: “Both Niederglatt/Zurich and Frenkendorf/Basel benefit from direct and therefore faster links to Rotterdam. We’re covering Switzerland’s most important economic regions – with the same price for both locations. Zurich and the eastern part of Switzerland especially might consider this new service attractive.”
Schweizerzug AG is focusing on the continuing optimisation of its overall level of service by catering to market needs proactively. In both January and February 2019, the company increased its departure frequencies between Frenkendorf and Niederglatt to the Port of Antwerp, offering shippers in both Switzerland and neighbouring countries an ever-expanding roster of routes and frequencies to the continent’s two busiest seaports for container shipping.
The latest schedule is available for download at www.schweizerzug.com
FrenkendorfNiederglattRotterdamSchweizerzug AGSwitzerland
0 comment
0
FacebookTwitterLinkedinEmail

SAVE THE DATE for our Alternative Fuels Online Conference

Join ABTO in Riga this October