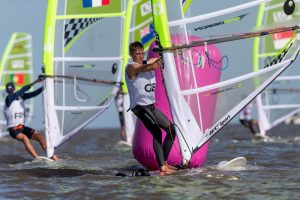 The 2019 edition of the Hempel Youth Sailing World Championships is just days away and anticipation is building as the sailors from 66 nations start to arrive in Gdynia, Poland.

More than 400 sailors are coming in to race across nine youth events including the Boy’s and Girl’s divisions of the 29er, 420, RS:X and Laser Radial as well as the Mixed Multihull, the Nacra 15.

The official arrival day is this Saturday (13 July) but sailors have been arriving all week long to acclimatise and ensure they are best prepared. Racing will commence on Monday 15 July and run through to Friday 19 July when nine new Hempel Youth World Champions will be crowned.

The Boy’s and Girl’s RS:X fleets feature a number of rising stars who have already racked up significant achievements in international competition. Fleets of 29 in the boy’s division and 20 in the girl’s will race in the RS:X.

France’s Fabien Pianazza is the only returning medallist in the Boy’s RS:X. The French racer sailed consistently at the front of the fleet in 2018 and was rewarded with a bronze medal. Pianazza experienced the top of the podium less than 12-months later at the RS:X European Championship in Palma de Mallorca, Spain.

In a hotly fought contest between himself and Nicolo Renna (ITA), Pianazza clinched gold by just a single point. His success in Mallorca means he is considered one of the favourites for gold.

Great Britain’s Finn Hawkins also has experience of performing at major international youth events. Hawkins clinched a bronze medal at the 2018 Youth Olympic Games in Buenos Aires, Argentina and will be looking to use that experience in Gdynia.

There are no returning medallists in the Girl’s RS:X but international experience and success is not short in supply.

Russia’s Yana Reznikova will make her Hempel Youth Sailing World Championships debut in Gdynia. At the Buenos Aires 2018 Youth Olympic Games the Russian edged out Israel’s Naama Gazit in the final race of the series to claim bronze by a single point.

Gazit overcame her disappointment at the Youth Olympic Games and recently won the European Championship title. However, the Israeli representative in Gdynia will be Linoy Geva who finished second at the 2019 European Championship and ninth at last year’s Youth Worlds. The race for the podium went down to the final day in Mallorca and Geva finished second to move up the leaderboard and claim silver.

France’s Heloise Macquaert finished ninth in the final Youth Europeans race and dropped from the top spot, having to settle for bronze. She sailed at the 2018 Youth Worlds, finishing seventh and will return to race in Gdynia aiming to make amends for her disappointment earlier this year.

Australia’s Amelia Quinlan, Korea’s Jieun Seo and USA’s Dominique Slater all return to the Youth Worlds after racing in 2018.

The Boy’s and Girl’s Laser Radial are the largest fleets in Gdynia with 57 and 47 sailors making up each fleet.

In 2018, Juan Cardozo of Argentina and Zac Littlewood of Australia battled it out for the silver and bronze medals as New Zealand’s Josh Armit took a convincing gold medal.

It came down to the final race and as Cardozo sat in the middle of the pack, Littlewood was pushing at the front. Littlewood worked his way up to sixth but this was not enough as he missed out on silver by a single point.

Cardozo and Littlewood will both return to the 2019 edition of the Hempel Youth Worlds and with no Armit, they will be favourites for the podium.

Spain’s Jordi Lladó Durán will also come in with some form. He recently finished second at the Laser Radial Youth Boy European Championships in Greece.

In the Laser Radial Girl’s fleet, only one top ten finisher from 2018 returns – Matilda Nicholls of Great Britain. The fleet is lacking in Youth Worlds experience but not short of it internationally.

Spain’s Ana Moncada Sánchez comes into the event off the back of a gold medal performance at the Laser Radial Youth Girl European Championships. She defeated Eline Verstraelen (BEL) and Rosine Baudet (SUI) to the title. The Belgian and Swiss racers will both be in Gdynia.

Click here to find out who the runners and riders will be in the Boy’s and Girl’s divisions of the 29er and 420 as well as the Mixed Multihull, the Nacra 15.

The official arrival day for the sailors will be Saturday 13 July, where they will collect their equipment from Ovington Boats (29er), Nautivela (420), Laser Performance / Maclaren (Laser Radial) and Nacra Sailing (Nacra 15). The RS:X racers are all bringing their own equipment for 2019.

The Opening Ceremony on Sunday 14 July will officially welcome the sailors to the city before racing commences on Monday 15 July. A single race on Friday 19 July will bring the 2019 edition of the Hempel Youth Sailing World Championships to a close.