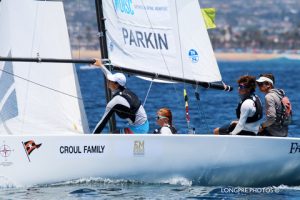 Jack Parkin (USA, Riverside YC) and his team of Bram Brakman, Victoria Thompson, and Wiley Rogers had a stellar day, 4 wins and 1 loss, to advance to second on the leaderboard

Takahashi’s overall points score of 14 points puts him two ahead of Jack Parkin (USA, Riverside YC), who had matched his 4-1 score to conclude Thursday with 12 points. Parkin’s crucial wins included close matches against Frank Dair (USA, California YC), who was in second after yesterday’s action, and Jordan Stevenson (NZL, Royal New Zealand Yacht Squadron). Four skippers are only one point behind Parkin with 11 points, including Dair, Stevenson, Nick Egnot-Johnson (NZL, RNZYS Youth Training Program) and Finn Tapper (AUS, Cruising Yacht Club of Australia). Of the four, all but Tapper are products of the youth programs of the RNZYS, the current holder of the America’s Cup.

Since only four sailors will make the semi-finals based on their final scores from the round-robins, racing tomorrow should please the growing spectator fleet in the Pacific Ocean off Newport Beach. It would be hard, however, to beat some of today’s racing, including perhaps the best match between Egnot-Johnson and Dair. As they sailed downwind for the last time, Egnot-Johnson was carrying a penalty – meaning that before the finish, he would either have to cause Dair to commit a foul—thereby neutralizing his penalty—or complete a 270 degree turn before the finish. In an example of world-class match racing, within a few boat lengths of the finish, Egnot-Johnson carried Dair, as “windward” boat, past the finish pin end and as both boats doused their spinnakers to return to the finish, he completed his penalty turn.

Both boats, with jibs halfway up, sailed slowly upwind but ended up crossing the finish line in the wrong direction, requiring them to “unwind” their course, round the pin end to starboard, and then finish downwind. In doing so, Egnot-Johnson’s only chance to cross ahead was to try to sail between Stevenson and the pin end buoy. While he got there, he simultaneously hit the pin, causing another penalty, and Dair safely crossed the line ahead.

More hot action is expected tomorrow. While Parkin’s path to the semi-finals would seem easier on paper since he faces four skippers not in contention for the semi-finals, when asked about that, he and his tactician Wiley Rogers said, “only on paper,” noting that as the round-robin matches, at least to date, have shown any of these skippers can beat any of the others in any given race.

Key matches among the contenders on Friday include Egnot-Johnson versus Tapper in the first flight (19) of the day, followed immediately by Takahashi against Dair, the latter needing a win more than Takahashi. In flight 20, Dair faces off against Stevenson, and in the final two flights of the round-robins, Stevenson faces off against Tapper (flight 21) and Takahashi against Egnot-Johnson in the final flight (22).

Conditions were very different than the 9-14 knot southerly winds experienced on days one and two, with a more typical south to southwest wind of 4-8 knots under clear blue skies and temperatures in the mid-70s – “champagne sailing conditions.”