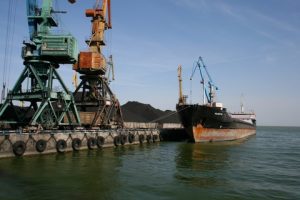 In the first half of 2019, Taganrog Sea Commercial Port JSC (TagSCP, a company of UCL Holding) handled 554,000 tonnes of cargo, down 11%, year-on-year. The decrease should be attributed to business decline in foreign trade market dealing with the port’s key types of cargo, coal and grain.

The positive dynamics was also demonstrated by liquid bulk cargo: its volume surged by 84% to 91,000 tonnes.
Container throughput of TagSCP totaled 600 TEU (1,300 tonnes), down 42% as compared with the same period of the previous year.

In January-June, TagSCP handled 409,400 tonnes of export cargo and 51,600 of import cargo. In the reporting period, handling of coastal trade cargo totaled 93,000 tonnes. The share of exports and imports in the total throughput was as high as 74% and 9% respectively with domestic cargo accounting for 17%. All in all, Taganrog Sea Commercial Port handled 6,182 railcars and 145 vessels.