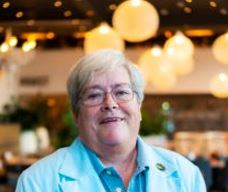 Kathy Metcalf, President and Chief Executive of the Chamber of Shipping of America, has been selected by Lloyd’s List’s awards judges to receive recognition for Lifetime Achievement. Judges applauded her career spanning both sea- and shore-time, regulatory and policy issues, government and industry.

They particularly highlighted Ms Metcalf’s passion for raising awareness of the maritime business both in the United States and overseas. Joe Farrell of Resolve Marine came a very close second, followed by Jorge Quijano, former administrator of Panama Canal Authority.

Kathy Metcalf is a 1978 graduate of the US Merchant Marine Academy (BS in Marine Transportation and Nautical Sciences) and a 1988 graduate of the Delaware Law School. She served in various positions in the energy industry including deck officer aboard large ocean-going tankers, marine safety and environmental director, corporate regulatory and compliance manager and state government affairs manager.

She joined the Chamber of Shipping of America in 1997, serving as Director of Maritime Affairs, until appointed CEO in June 2015. The Chamber is a maritime trade association which represents a significant number of US-based companies that own, operate or charter tankers, container ships, and other merchant vessels engaged in both the domestic and international trades.

Speaking after she was appointed an Ambassador for WISTA International, Ms Metcalf said it was vital to promote the maritime industry “at all levels of educational systems globally.”

Lloyd’s List’s Americas Awards will be held at JW Marriott Houston Downtown on Wednesday September 25th. The afternoon event will be run in parallel with the Lloyd’s List Future Fuels Forum, which looks at risks still in play ahead of IMO 2020 and whether the decarbonisation pathway for shipping is reality or fantasy.

To register for the Americas Awards and Future Fuels Forum, click HERE