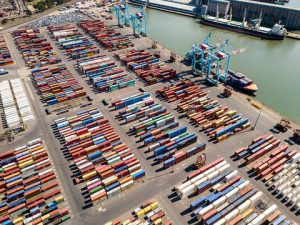 A new express feeder service to Liverpool has smashed its initial targets almost immediately after launching in June, underlining demand for a direct Far East call at the port.

The weekly Yang Ming service from Southampton is now operating at 150 boxes per week, three times more than expected, transporting mainly retail goods to distribution centres in the North West.

B&M is one of the national chains driving this growth and is saying it would move 100 per cent of its cargo from southern ports to Liverpool if there was a direct call from the Far East.

Simon Williams from Yang Ming said: “This new service has been a great success for us already. We clearly expected good demand but the immediate growth has been exceptional.”

Jerome Wildsmith, Head of Supply Chain from B&M said “Over the past few years, we have strengthened our relationship with the Port of Liverpool, importing increasingly larger volumes of cargo and developing a strong relationship with Yang Ming, who have offered an express feeder service into Liverpool from Southampton.

“We recently increased our imports into Liverpool from 50% to 80% of our total cargo, with a view to converting this into a permanent move. As we continue to grow the business, we are keen to secure a direct Far East service into Liverpool so that we’ll be able to offer our customers a more efficient service, as well as reduce our carbon footprint thanks to the fantastic connectivity provided by Peel Port’s multimodal services.”

Mark Whitworth, CEO from Peel Ports, added: “The evidence keeps building for why the Port of Liverpool should be seen as the natural choice for global imports and exports and the opportunities we provide to business based in the North West of the UK. The interest shown in this Yang Ming service clearly demonstrates the commercial opportunity that exists for cargo owners and shipping lines.”

Yang Ming is a global shipping line headquartered in Taiwan, with offices around the world. It has a wide range of weekly services covering Asia, Europe, America, Australia and Africa.

B&M, one of the UK’s leading variety retailers, announced earlier this year it was increasing its cargo into the Port of Liverpool by 30 per cent following frustrations with southern ports. The company, which has 600 stores and employs over 28,000 staff across the UK, now ships 80 per cent of its stock via Liverpool, increasing 30 per cent of the volume on a trial basis. B&M ultimately expects to shift all cargo to Liverpool in a permanent move, citing quicker lead-times and a reduction in road miles afforded by the port’s central location as among the key reasons why.