Volatility and uncertainty bring the BDI@1,963… What next..? 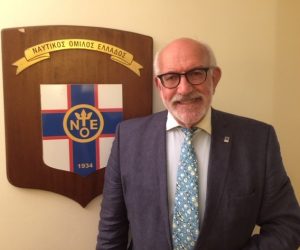 Volatility and uncertainty bring the BDI@1,963… What next..?

Per our upload earlier on today the BDI (Baltic Dry Index) went on a free fall headed by the triple digit fall of the Capes. Geopolitics still getting sour. John Faraclas end of the day recap:

The BDI lost 90 points thanks to the triple digit fall of the Capes’ BCI now at 3,601 – down 228 points! That was the most important fall over the last six months given the continuous rise of this size!

One point down for the Handies’ BHSI now reading 691!

The Geopolitics more than perplexed given also the efforts of the Democrats to impeach president Trump! Expect a mess situ in the perplexed world of espionage and security services club! Welcome to the whistle-blowers’ club!

The Migrants continue to flow over from the Anatolian coast of Turkey and mainland Turkey to mainland Greece and the Greek Islands like never before. A very well mastermind plan by Turkey’s president Erdogan to undermine the EU via his blackmail tactics in all fronts. The mandarins of Brussels must be ousted as well as all incapacitated politicians there. SHAME!

Greece is once again the victim of this despicable Turkish actions with the silent support of the EU incompetent politicians and diplomats. As stated in my question on Migrants during the LISW2019 main conference on the 12 of September the only way is: A Naval Blockade with a Mandate and Rules of Engagement NOT only for the Aegean but for the entire med and Black Sea. End of the story; the rest is Hype!!! Wake up before it’s too late with incalculable repercussions for all. Turkey’s magalomaniac designs  to become the regional leader will trigger unwanted situations and even its backers will pay the heavy damages.

Pestering Cyprus and Greece might backfire and lead to unstoppable scenarios; it’s the Turks to blame all the way and the EU whose territory its being invaded and the culprits of Brussels do nothing; only statements. Where is the actions?  The inhumane leaders in Brussels will only listen when their counties are invaded by five more million of Migrants that Turkish president Erdogan will send them… CAUTION!!

BREXIT’s coming tsunami will be detrimental for all. Funny story: we pay all these politicians from both sides of the Channel to strike a deal and they cannot; give it to shipbrokers and we will do it!! We provoke you for this!

At the other side of the channel, France pays its respects to ex-president Jacques Chirac who passed away this morning at the age of 86. Chirac was a world leader in his own right and managed well all affairs he got involved and was able to unite the French people as Mayor of Paris and twice as prime Minister and president.

Stenas’ “Stena Imperio” was released today by its Iranian captors and let’s see what’s next; we are worried though that the entire Persian Gulf might go up on fire in case Saudi Arabia and others retaliate following an attack at Aramcos’ installation. We might see as they say a full scale Armageddon… A radius of 3,000 miles and the countries within might get involved… Obviously a three-fold number of Migrants will be added… By hte way: what do you make whn their is an embargo on Iran and Turkey continues to receive oil from Iran? Eh!!! And what about China?

Caution as the Trade Wars continue! 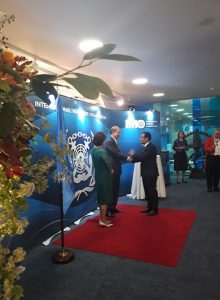 On another tone and note at the IMO’s World Maritime Day a great event took place tonight: “Empowering Women in the Maritime Community!”

Eva Mardas was there and she got overwhelmed from this event which was well organised with hundreds attending.

The atmosphere was really warm. IMO secretary-general Kitack Lim closed the event and talked briefly about the importance of women’s presence into the wider maritime community. We hope and believe that this empowerment is not just a trend but an ongoing reality!

We at www.allaboutshipping.co.uk fully support WISTA International and all 47 countries’ WISTAs and encourage women to take on the Maritime challenge and adventure and we will continue to support them to all intents and purposes to succeed! 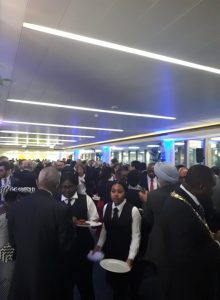 From the reception; photo by Eva Mardas

A great event following the successful one by WISTA UK for the 45th Annivesary from lunching WISTA in 1974 at the same place!

Women play and will continue to play a pivotal role in Shipping; their efforts and strides and achievements are monumental! 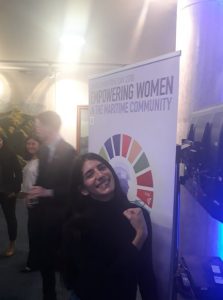 Have a nice evening and remain on guard from actions emanating from Pirates, Terrorists, Criminals and Business hooligans whatsoever wherever you ae on Planet Ocean!