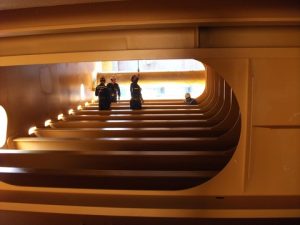 Nippon Paint Marine has added to its NOA range of self-indicating epoxy coatings with a new system specially developed to protect chemical and product carrier tanks from corrosion and cargo contamination.

Makoto Nakagawa, General Manager Sales and Marketing, Nippon Paint Marine Coatings, Osaka, said: “The addition of NOA PC 700 to our established NOA range significantly protects inner cargo tanks from corrosion while preventing cargo contamination. As with all our NOA coatings, application is self-indicating which enables the applicator to visually confirm the correct (wet/dry film thickness has been achieved during the application process. Correct film thickness is crucial to mitigating against corrosion risk to maintain ship structural strength.” 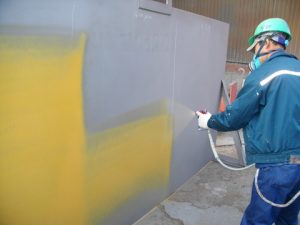 If the coating appears opaque during application, then correct film thickness has been achieved

Since the 1998 market launch of the first NOA (Nippon Optimised and Advanced) coating system, Nippon Paint Marine has introduced a number of different NOA products. And while each one is designed according to the anti-corrosive requirements of different parts of ship, all the coatings are based on pigments that have various opacities depending on film thickness.

Hiro Yamashita, Technical Manager, Nippon Paint Marine (Europe), added: “While NOA application improves coating quality and helps to reduce manhours and costs, the coating system is fundamental to maintaining structural integrity. This is becoming more and more apparent with the increase in areas requiring coating and the reduction in the availability of skilled applicators.

“In drydock, for instance, our NOA 10M system – specifically developed for hull maintenance and repair – means just one touch-up coat can be applied in the knowledge that the self-indicating function will ensure that the thickness applied is correct. This means fewer days in dock, which contributes to lower drydock costs for the owner. By improving a ship’s corrosion resistance through more accurate coating application, ships are less prone to rusting early.” 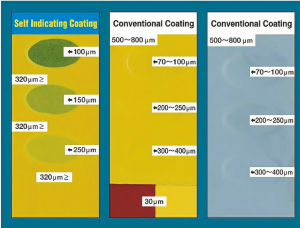 NOA is a film thickness controller

With the introduction of NOA PC 700, Nippon Paint Marine hopes to emulate the market success of its NOA60 HS product, which has been applied to the ballast tanks of more than 1,300 newbuild vessels since its introduction in 1998.

Applied in two coats at 160µm per coat, NOA 60HS meets all PSPC acceptance criteria for water and cargo resistance, adhesion, cathodic disbondment, pinholes and undercutting. It is easy to clean and has low emissions of volatile organic compounds.

Suitable for multipurpose use, its enhanced resistance to freshwater and seawater has led to the system becoming the number one coating for ballast tanks and void space protection.