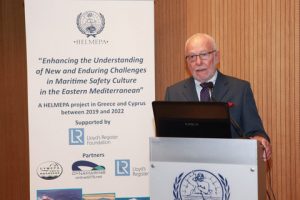 OnThursday, 3 October 2019 representatives of the maritime press in Piraeus, Greece were presented with this 3-year long project administrated by HELMEPA, supported by the Lloyd’s Register Foundation* (LRF) and implemented in Greece and Cyprus until 2022. The Press conference was hosted at the historic for HELMEPA building of CERES company, which also offered a light buffet at the closing of the event.

The press conference panel included HELMEPA’s Chairman, Dr G. Gratsos and the partners of the project, Lloyd’s Register’s South Europe Marine & Offshore Manager, Theodossis Stamatellos, CYMEPA’s Chairman, George Tsavliris and DYNAMARINe’s Director, Dr. Stelios Perissakis, a HELMEPA Associate Member. The CEO of the Australian Maritime Safety Authority (AMSA), Mick Kinley, also joined the panel.  His organization has been cooperating with HELMEPA on safety since 2000 and is expected to contribute towards enriching the project with their expertise on the issue. 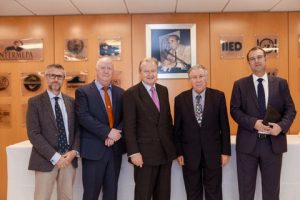 The Director General of HELMEPA, Dimitris Mitsatsos, described the aim, tools and expected impact of the project to the journalists present and representatives of the fishing and pleasure craft sectors as well as other maritime stakeholders in Greece. A “Vessel Incident Reporting Platform”, seminars and workshops in coastal cities of both countries, bridge simulator practice in HELMEPA’s Maritime Training Center, e-learning programs and a wide safety awareness campaign are the tools for achieving the project’s objectives.

Questions were answered by the panelists and Mick Kinley congratulated LRF and the project’s partners for their efforts towards enhancing maritime safety culture in the Eastern Mediterranean and pledged AMSA’s support. 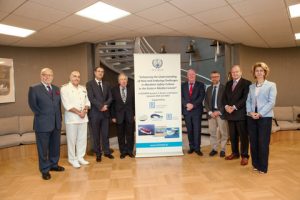 Dimitris Mitsatsos urged the journalists to actively take part in this initiative thus themselves also becoming “Safety Ambassadors” in Greece and Cyprus.