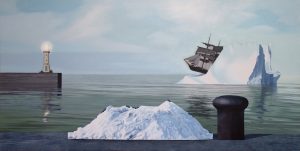 A nautical setting is framing an inaugural international art competition named Wales Contemporary, or in the Welsh language Cymru Gyfoes.

The competition, open to two-dimensional work in all mediums except photography, has been launched at the Waterfront Gallery at Milford Haven. 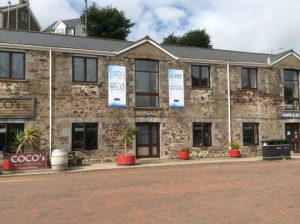 The gallery, housed in the Old Sail Loft at Milford Docks on the Haven Waterway, has lent its 3,000 sq ft facilities to host the event.

The show continues at the Pembrokeshire venue until October 29, 2019, after which it will move to the prestigious Mall Galleries in London.

It inspired one of the entrants to present an interpretation of a fascinating episode from maritime history linking the port of Cardiff with the ill-fated polar expedition led by Captain Scott.

This example of the vibrant national connections in the entries is painted in oil on canvas by James Moore, who is based in the Welsh capital, and entitled Scott Abandons Cardiff 1910 AD. He describes it as a landscape history painting.

The subject relates to explorer Captain Scott and his ship Terra Nova leaving for Antarctica from Cardiff, where shipowners and local interests had given substantial financial support and free towage and docking, thanks to a huge fund-raising campaign by Lieutenant Teddy Evans, second in command to Scott. 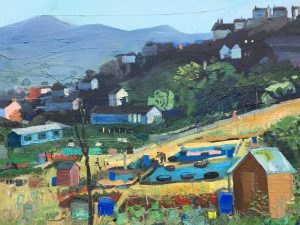 The Terra Nova left London on June 1, 1910, for Cardiff, whose citizens had in total donated to the project £2,500, more than any other city in Britain and turned out in their thousands to welcome the ship to Roath Dock.

Flying the flag and coat of arms of Cardiff and the Welsh Dragon, the Terra Nova was towed out by two tugs, and two paddle steamers and many smaller vessels accompanied her into the Bristol Channel.

Sadly, it soon became apparent that the ship still needed attention to make her fit for the task, and Scott was only to re-join her much later, from New Zealand. Eventually Scott and his team perished on the Polar icecap. A memorial lighthouse, erected by public subscription in 1915, sits on Roath Park Lake, and this symbol appears in James Moore’s picture, as it has done in some other sea disaster pictures over the years, along with an iceberg cruelly demolishing the vessel.

James Moore has said: “I’m interested in a subversion of the role of a painter of realistic imagery.” His paintings “act as a pointer to the plastic, simulated space that we increasingly inhabit.”

The organisers say that the “exhibition presents the viewer with a characterful and compelling insight into the many things that make Wales Welsh.” It “combines crisp, photorealistic seascapes with soft, romantic watercolours balancing on the edge of figuration. Tribute is also paid to the rich diversity of Welsh landscapes, from its glowering mountain ranges to its industrial towns, its valley villages to its rugged coastlines.” 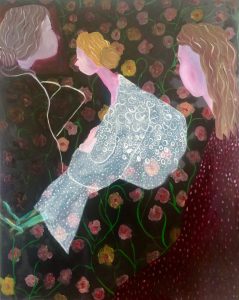 For instance, Sarah Carvell presents Saturday Morning at Ffordd Las Allotments, an oil on canvas displaying her appreciation of the gentle Denbighshire landscape.

A beauty spot named after mythical sprites said to live there is shown in watercolour by Nicola Gregory in Fairy Glen 2 Betws y Coed.

Sally Hands, who has loved living in South Wales for the past 20 years, exhibits White Vans on the M4. This is one of her specialities, a hand-printed wood engraving.

Pete Monaghan who describes himself as an “Irish contemporary artist working in wild west Wales and southern Germany” shows the acrylic and collage on wood Blue Tin (West).

The direct title Women is given by Christy Burdock to her oil on canvas. Among her many successes has been the RCA Gordon Peter Pickard award in 2016 to travel on the transatlantic cruiseship Queen Mary 2 “researching a community of people in their sixties, seventies and eighties, enjoying frivolous casual encounters during retirement.”

Elsewhere there are a carnivalesque imagining of the Arthurian legend, an overpopulated Mount Snowdon, and a tongue-in-cheek representation of the much-maligned leek.

Gallery director David Randell said: “We are delighted with the response and considering that entries came from all over the world, the total of 154 Welsh entries including 51 from Pembrokeshire residents is impressive. Equally impressive is the number of Welsh entries selected, with six of the 23 selected artists coming from Pembrokeshire and showing seven works between them.  Two of the six artists are regular exhibitors at the gallery.”

Milford Haven and its deep-water natural harbour has centuries-long maritime history. Admiral Horatio Nelson described it as “the finest port in Christendom.”

The port is one of the largest in the UK in terms of tonnage and continues the important role it has had since the 1960s as a leading energy hub.  One of the less glorious moments was when the crude oil tanker Sea Empress ran aground in 1996, causing a substantial oil spill. 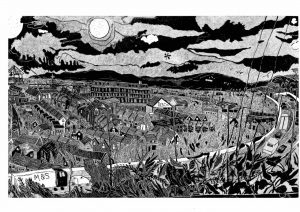 White Vans on the M4.

On the positive environmental side, the Pembrokeshire Coast National Park and Milford Waterfront leisure and tourism facilities attract many thousands of visitors.

The contribution of art and culture has been recognised by the Welsh Government as a positive economic driver especially in rural areas such as West Wales, and as a valuable support to the local economy. 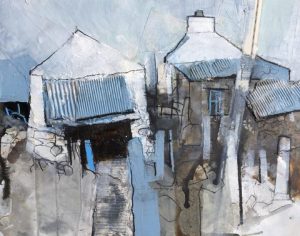 Following the Milford Haven showing, the exhibition will travel to the Mall Galleries, where it will be available to view from November 5-10, 2019.

In 2020, work will be exhibited early in that year and be displayed at the Senedd and the Pierhead Building in Cardiff during its summer recess.

In 2020, work will be exhibited early in that year and be displayed at the Senedd and the Pierhead Building in Cardiff during its summer recess.

White Vans on the M4. Wood engraving. By Sally Hands.

The event is organised in association with Visit Wales and administered by the visual arts consultancy Parker Harris of London.