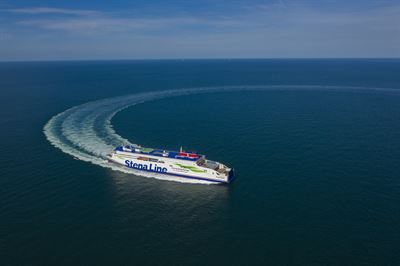 Stena Line has announced that Stena Estrid, the first of five vessels being built for the leading ferry company in China, has successfully completed her sea trials in China’s Yellow Sea. Following three days of extensive testing, the new vessel performed excellently across a wide range of stringent test criteria and is now on schedule to start operating on the Dublin to Holyhead route in early 2020.

Stena Estrid is the first of five new Stena Line next generation RoPax vessels that are being constructed at the AVIC Weihai Shipyard in China, three of which will be introduced on the company’s Irish Sea routes from Dublin to Holyhead and Belfast to Liverpool. Sister ship Stena Edda is due to commence operations from Belfast to Liverpool in spring 2020, with the third vessel Stena Embla expected to be introduced on the same route in early 2021.

The sea trials are designed to ensure that all systems are fully operational and in line with strict specifications outlined by Stena Line, including areas such as engine performance and fuel consumption, navigation and radio equipment, emergency systems, speed tests, manoeuvrability, engine and thruster tests, and safety tests.

“Today the first of our five next generation ferries achieved a very important milestone. Sea trials are a critical phase in a new ship’s development, as our first opportunity to take a new vessel out to sea, put her through her paces and test that she is up to the high standards required by Stena Line”, said Paul Grant, Chief Commercial Officer, Irish Sea and North Sea at Stena Line.

“We systematically go through all aspects of the new ship and I am pleased to say that Stena Estrid has successfully completed every trial.  We now look forward to the full handover of the vessel by the shipyard and to starting her journey to the Irish Sea,” added Mr Grant.

“Stena Estrid will bring many benefits to our customers including speedy and efficient loading and unloading operations, plus further development of our Scandinavian-inspired facilities including our restful and bespoke Hygge Lounge and the latest upgrade of our premium product, the Stena Plus concept.  The new ships will be spacious, light and make great use of panoramic views,” he added.

Stena Line CEO Niclas Mårtensson said that the introduction of Stena Estrid and her two sister ships Stena Edda and Stena Embla, reflected the company’s commitment to the Irish Sea.

“The Irish Sea is very important to Stena Line’s business and represents a significant part of our overall revenue,” said Mr Mårtensson.

“This is a very exciting time for our business and I’m proud that as Europe’s largest ferry company, Stena Line continues to shape the industry for the next generation of freight and travel customers,” he concluded.

Next up for Stena Estrid is an official handover ceremony at the shipyard before she sets sail on the long journey from China to Holyhead to start operating on the Dublin to Holyhead route in early 2020.

At 215 metres in length, Stena Estrid and her two sister ships for the Irish Sea will be larger than today’s standard RoPax vessels and will provide freight capacity of 3,100 lane meters and the space to carry 120 cars and 1,000 passengers and crew.

The name Estrid is connected to Stena Line’s Scandinavian heritage. It is an Old Norse eastern-nordic version of the name Astrid. Estrid is commonly found on old runestones and means ‘divinely beautiful’.