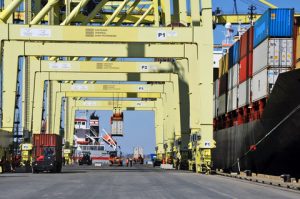 In January-September of 2019, Container Terminal Saint-Petersburg JSC (CTSP) handled 581,600 TEUs, which represents a 5.7% growth on in the same period a year earlier.

Container imports increased by 7%, year-on-year, to 283,400 TEUs including 62,300 TEUs of loaded refrigerated containers.

In the reporting period, CTSP handled 364 vessels with an average shipload of 1,598 TEUs.

Railway container traffic accounted for 23% of the CTSP’s total throughput.

Thanks to the 2019 nine-month results, CTSP retained its leadership by container volumes among stevedoring companies of the Russian Federation.

HFW Ship Finance Briefing – Getting the deal through 2019