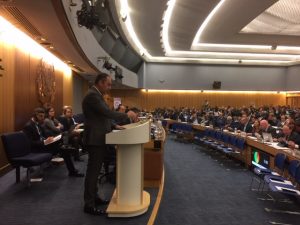 What an address that was by the Greek Minister of Maritime Affairs and Insular Policy on the  occasion of the 31st IMO Assembly Opening Session earlier on this afternoon; Ioannis Plakiotakis’ address was to all and for all intents and purposes given the state of the Shipping Industry.

Honourable Chairwoman of the Assembly,

I feel deeply honoured and privileged to address the distinguished participants of the 31st session of the IMO Assembly, considering this as an excellent opportunity for us all to reconfirm, officially and clearly, our dedication to the IMO as the sole authoritative regulator of international shipping. We all share the important responsibility of bequeathing to future generations an efficient and sustainable maritime transport system.

As Minister of Maritime Affairs and Insular Policy of the Hellenic Republic, I am proud to represent a country with a great tradition in shipping.  Greece, a relatively small country in geographical terms, is really proud to control a fleet of almost 5000 merchant vessels, the largest worldwide, and a national fleet genuinely linked with the country, ranking eight in number of ships. The Greek owned fleet accounts for 21% and 53% of the global and the EU dwt tonnage, respectively. In addition, the Greek shipping cluster is a uniquely successful bright spot in the Greek economy. The core of the cluster is composed of almost fifteen hundred ship-management and chartering companies, mostly operating from Piraeus.

Ιn this sense, Greece’s interest in providing international shipping services is amongst the largest worldwide. Our aspiration to be represented in Category A of the IMO Council is a genuine reflection of our sincere interest in serving the IMO and working closely with our counterparts to ensure that, in a rapidly changing world, shipping will continue to be the leader in the pathway to sustainable growth and prosperity.

It goes without saying that a free and stable global regulatory framework guaranteeing the worldwide movement of cargoes in a genuinely competitive environment is a sine-qua-non for the operation of international shipping.

At the same time, special care should be given to well researched and impact assessed regulation. Nowadays, every decision, we make within the IMO, has a possible impact on global trade and on millions of consumers around the world, especially those living in remote and in island states. 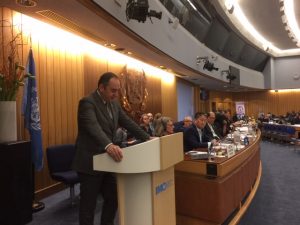 Getting to the point

As is the case today, shipping of tomorrow cannot be conceivable without the appropriate training of its human capital of shipping, which has to be promoted and supported for meeting the future needs and requirements, no matter what level the trend to automation reaches. Digitalization and automation of ships are correctly considered as key priorities that should be further developed. However, the future of international shipping cannot be conceived without skilled seafarers on board and competent personnel ashore, thus the need for continuous training and adaptation to the needs.

At this point, in the light of a recent piracy attack on a Greek flagged ship in west Africa that led to the abduction of four crew members, including a 20 year-old cadet, and similar recent attacks on further vessels in the region, brought again the dark side of maritime on the spotlight. We believe that concerted action by all stakeholders involved is an absolute priority and there is an urgent need for a substantial and effective response to this scourge for our seafarers, for our shipping.

As a country severely hit by an unprecedented increase in refugee and migration flows by sea during the past five years, I cannot but commend the work of all our people with a mission to save the ultimate value at sea, that of human life. The Hellenic Coast Guard, paying the highest consideration to the value of life and the fundamental human rights, has rescued during the period 2015 till today more than a quarter million of migrants & refugees attempting to cross our sea borders with unsafe and overcrowded boats, mostly rubber ones.

In the same vein, I would like to express our sincere gratitude to the international shipping community, who showed the maximum solidarity. At the same time, I would like to call the UN system as a whole and the EU to continue keeping the greatest attention, to prevent unsafe maritime migration and mitigate the consequences of it. 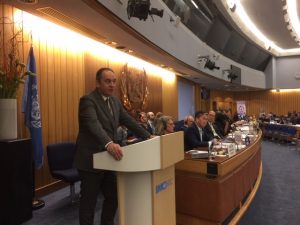 He was very clear on decarbonisation

I have already mentioned the need for all of us to ensure the sustainability of shipping in the future. In this regard, a major task lies imminently ahead of us all, in relation to the timely delivery of appropriate short-term measures for the Reduction of Greenhouse Gas Emissions from Ships. I should clearly declare that we are all committed to deliver. In our view, the best way to do this is in a realistic, practical and easy to implement way, for both the industry and the national administrations. I call upon all our counterparts in the IMO to frankly and unreservedly support our own landmark decision to agree on the Initial IMO Strategy and its objectives, and to work in a united spirit in order to achieve the decarbonisation of shipping as soon as efficient alternative fuels are widely deployed during this century.

In the same spirit, I would like to draw the attention of the entire IMO membership to a very important and crucial, for the maritime transport and international trade, issue. This is the subject of the implementation of the global Sulphur cap in marine fuels. Global availability of safe compliant fuels remains a big challenge ahead. To secure this, we need to involve all stakeholders in the fuel supply chain. All parts should show the same degree of commitment as that of the shipping industry and the IMO for the successful implementation of the new sulphur limit. Ships and crews are putting major efforts to ensure compliance; oil suppliers have to deliver and also to guide the crews and the industry to the safe use of compliant fuels blends. For its part, Greece is putting in force legislation for the imposition of sanctions to fuel suppliers that deliver SOLAS and MARPOL non-compliant fuel. We would urge all IMO MS to do the same.

I am aware that the matter has been extensively discussed in the competent bodies of the IMO and certain critical dimensions of it, such as the vital safety concerns that arise in connection to it, are still being examined at the relevant IMO committees. This by itself makes it clear that we are not over and done with this issue, as perhaps the wider perception is. On the contrary; we are yet to be confronted with the full scale reality of the availability, compatibility and safety challenges and grave risks of the new marine low Sulphur fuel oils, especially blended ones.

I do not wish to become a “Kassandra”, the Greek ancient princess who was the prophet of doom, the prophet of bad news which no one believed but which, however, always came true. But unless the international community looks into these matters and effectively addresses them with the earnestness they deserve and the urgency they require, I fear that the world will witness not only serious trade disruptions but most importantly even fatalities. And I am certain that this is something that everyone here strongly hopes that it will never happen.

But hope is not enough. Certainty is needed and this is only in the hands of this Assembly. As responsible members of this unique United Nations’ Agency, our top priority and goal, over and above any other consideration, should be foremost the safety of life at sea and the safety of the environment.

To this effect, and in order to allow the time for the identified problems to be properly resolved, before any fatal accidents occur, I urge the IMO Assembly and all Member States to take a courageous stance on this matter, taking an extraordinary, maybe atypical but of substance decision with the aim of coming up with a solution to these problems, and if need be a postponement of the implementation of the regulation until such a solution is found. The IMO has the means and the expertise to do that. It should also have the will to do so.

I put my trust in the sense of responsibility and duty that all IMO Member States have to serve the mission of the IMO and safeguard safety of life at sea and the environment. 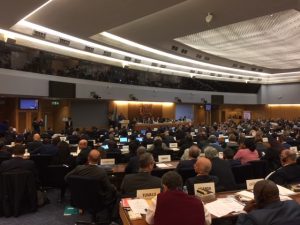 a full house with all carefully listening

Taking into account all the modern challenges for international shipping, Greece commits itself to the further invigoration of the IMO, to meet the expectations of its Member States, the shipping industry and the international community as a whole. We all have to combine our efforts in ensuring shipping’s smooth transition to the new era which requires all economic sectors to adapt to the current demand for efficiency, sustainability and growth. Greece declares its full dedication to this goal and is committed to sincerely cooperate with all states within the IMO, as it has done for more than 60 years now, in order to achieve this noble objective.

Expressing, on behalf of the Hellenic Government, my wishes for every success to the Assembly’s deliberations, I sincerely thank you for your attention.”