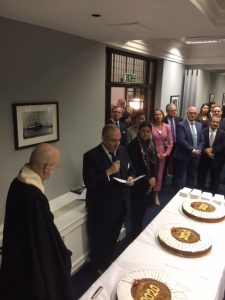 The Annual Vasilopita event of the GSCC (Greek Shipping Co-operation Committee) took place earlier on tonight at the Royal  Victoria, Royal Albert and King Geoge V Rooms of the Baltic Exchange – the temple of British and International shipping.

Over 200 guests were there and together with the members of the Committee celebrated the New Year, 2020, a year which looks like everybody WILL remember for ever.

This is the event which marks the begining of the year  for Greek and  international shipping in the Square Mile.

Anny Zade and John Faraclas were there with their cameras: 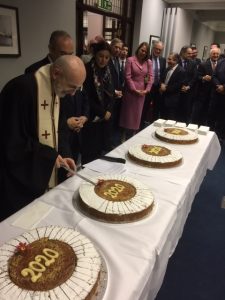 Archmandrite Theonas from the Greek Orthodox Cathedral of Saint Sophia officiated the teletourgy of the event –  blessings and cutting of the 2020 Vasilopita, given that his Eminence Archbishop Nikitas of Thyateira and Great Britain accompanied His Excellency the Greek president Prokopis Pavlopoulos in Ireland during his official visit there.

Three lucky punters won respective sovereigns; Andreas A. Tsavliris – he has won it before a couple of times, oh lucky man, Lambros Hilas and Stratos Krimizeas.

Present was the United Kingdom’s Minister for Shipping Ms Nusrat Ghani – she managed to make it from her morning visit up in the Port of Blyth, and she delivered an excellent speech enhancing British – Greek shipping relations. The Greek Ambassador Dimitris Karamitsos-Tziras was also present. A strong team from Maritime London was present too headed by its chairman Lord Mountevans; vice chairman Harry Theocharis was there too with his wife, as well as Jos Standerwick CEO from Maritime London. 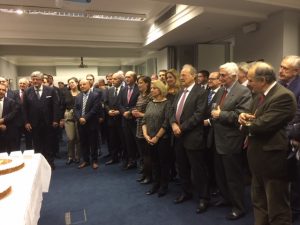 The Baltic’s Chairman and CEO Denis Petropoulos and Mark Jackson were present as well as members of the Baltic Exchange’s Secretariat.

Radm (HCG) Efthimios E. Mitropoulos, Emeritus Secretary-General of the IMO was present too.

The biggest group was that of the HESGB (Hellenic Engineers Society of Great Britain) headed by its president Dimitris N. Monioudis – as always a very strong presence. 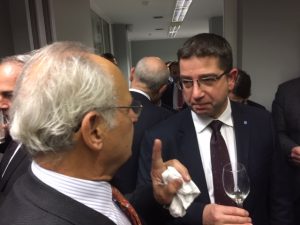 Lloyd’s Register made its presence felt with members from its London HQ – headed by Nick Brown, and Greece – headed by Theodosis Stamatellos, being present given yesterday’s Vasilopita event at their 71 Fenchurch Street magnificent building… an event that we unfortunately missed.

Representing the Shipping Office at the Greek Embassy in London  was Commander (HCG) Eleftheria Theodossopoulou – her other colleagues were attending other official duties.

All other Class Societies  – ABS with Vassilios Kroustallis,  BV with Yiannis Calogeras and DNV GL with Costas Papadakis,  ClassNK’s Daisuke Shiraki, China Register of Shipping rep, as always, were present… 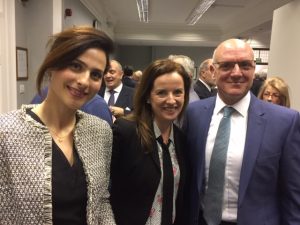 Posidonia founder Themis Vokos was there too being also the winner of …smiling!!!

It was good and ecouraging to see also young people from the international shipping fraternity, mainly Greeks attending the event and above all it was good talking to them and see how they respond to today’s perplexed shipping and geopolitical challenges!

Herebelow follows the excellent, brief and to the point speech by Harry J. Fafalios: 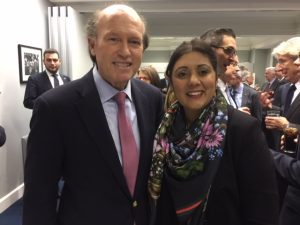 As is our custom we welcome you to the cutting our Vassilopitta with which we bring in the New Year. We welcome today Archimandrite Theonas of Saint Sophia Cathedral and thank you for conducting the blessing.

2020 has begun with some confusion due to the less than perfect way that the I.M.O. low sulphur rules have been put into practice.

Supply problems, quality problems, pricing problems are reigning worldwide as global shipping companies are doing their best to cope with, yet another imperfectly thought out piece of legislation. Non-compliant fuels still remain on board vessels through the decisions of charterers which will be difficult to remove by the deadline of 1st March. I.M.O. cannot solely regulate ship operators directly without taking into account the pivotal role of charterers, oil refiners and bunker suppliers. Clearly this is imperfect regulation! 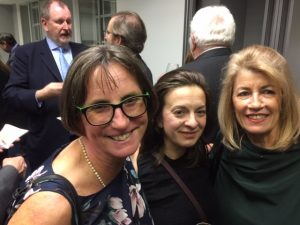 The Nautical Institute’s Bridget Hogan – WISTA UK Woman of the Year 2019 winner, with her colleague Argiro Bell and Anny Zade

We hope that going forward towards 2030 and then 2050 there will be a closer dialogue between regulators and industry in coming to a workable solution vis-à-vis reducing greenhouse gases.

Whilst the events in the Middle East could bring about great dislocation in trade and global security it seems that so far the necessity to keep the region moving has stopped this area becoming a major war zone yet.

In the West, an upcoming U.S. election will create uncertainty as both political parties do their best to discredit each other’s candidates.

In the U.K. the result of the National Elections have put the BREXIT policy on a more secure footing and it is hoped that the moderate European nations will help bring about a realistic trade agreement. 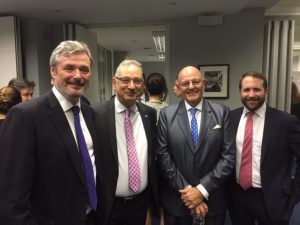 Whilst the U.S. trade wars are still raging, we still see a large amount of cargo moving and a hope that a greater normalization of commerce will occur.

Fortunately, many of the shipping markets have prospered in the last few months. Tankers, Containers and L.N.G. have seen better days whilst Drybulk has been decidedly unexciting.

Unfortunately, the order books are still larger than the world fleets will need in the long term, thus putting off a long-term freight recovery.

Regardless of this uncertainty Greek Companies are continuing to renew and update their fleet at a fair pace in order to continue to remain the world’s most prominent and energy efficient tonnage providers. Greek Owners are also closely looking at alternative fuels, such as L.N.G., in order to be at the forefront of the environmental debate. 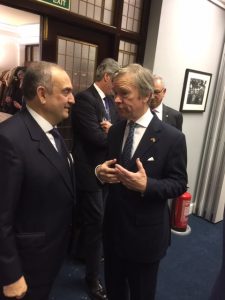 In the quest to find solutions to our longer-term propulsion issues it has been suggested that a fund is created in order to spur on more research and development.

One has to be very careful to ensure that such a fund will channel its resources in the right direction and not become a bottomless pit of misused financial resources.

Most of all it is the responsibility of shipbuilders and marine propulsion manufacturers to look for the appropriate future powerplants that our industry will need.

We are so proud to say that being based in London we are close to all the major national and international maritime organizations and we are in close contact and consultation with most of them.

We are also fortunate to be close to the Baltic Exchange with whom our members have over a century and half of membership in some cases. 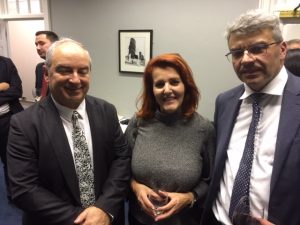 In Greece we will continue to remind the Government to invest more in merchant marine education academies and if they cannot do so at least permit private sector schools to help fill the gap.

We must also stress the need to have more effective governmental representation on a national level at the I.M.O. and the E.U. and that such individuals should have a longer stay in these posts.

Finally, we would like to stress how important the Hellenic Coast Guard is and its contribution to Greek Shipping at home and around the world.

My speech would be incomplete if I did not mention the most valuable element of our industry, our people. It is the crews of the ships and the shore staff that make Greek Shipping special, unique and world beating. 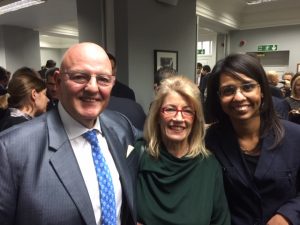 Finally, I would personally like to thank all my G.S.C.C. colleagues for their dedication and hard work and in particular to thank Kostas Amarantidis and Maria Syllingnaki for running this organization so smoothly.

Indeed many congratulations to Radm (HCG) Kostas Amarantidis, the Director of the GSCC and Maria Syllingnaki its secretary.

P.S. This year’s Vasilopita was the best ever; tastewise: unchallenged. That was the verdict of the many Greek women present who know a thing or two about preparation of this speciality.